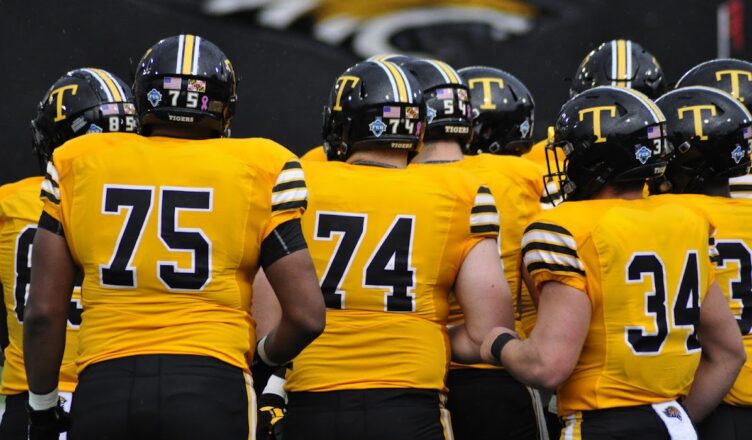 “For all the pundits who think the team we just played isn’t any good, you can throw that record out the door and they’re a very good football team,” Head coach Rob Ambrose said. “With that being said I’m kind of proud we’re one of the few teams to beat them by more than one score.”

On the second play from scrimmage, graduate running back Jerry Howard Jr. hurdled a defender and picked up 41 yards. The Tigers settled for a 21-yard field goal by sophomore kicker Keegan Vaughn.

Towson drove down the field with a 17 play, 98 yard drive that resulted in a touchdown by sophomore running back Devin Matthews on a direct snap. The drive took 8:29 of game time off the clock.

“The ability to play with 11, or 10 and we’re dropping out the quarterback and they gotta put someone out there just in case,” Ambrose said. “You might wanna keep doing that because we might have a trick play or two in there so we can’t key in on the direct snap stuff.”

Midway through the second quarter, senior running back Karl Mofor had several runs over ten yards. One was a 17-yard gain where he broke several tackles that put Albany in the red zone. However, graduate cornerback Mark Collins Jr. intercepted a pass and returned it 80 yards for a touchdown.

“I was reading two and I saw all week we were taught to trigger on the bubble and really take care of the perimeter screen game,” Collins said. “So once I saw it I just read and react and try to make a play.”

Ambrose said it was reminiscent of the last time the two teams played.

“If you go back to 2019 that play itself destroyed us, and we weren’t gonna let it happen again,” Ambrose said. “So we let them have one just so we could get one.”

Graduate tight end Jason Epps took a screen 21 yards to the Great Danes 41. The Tigers faced a fourth and goal at the one. Matthews took the direct snap and scored his second touchdown. Towson led 24-0 at halftime.

On the first play of the second half, freshman wide receiver Roy Alexander caught a 40 yard pass to the Tigers 35. The drive stalled as redshirt senior linebacker Christian Dixon forced a fumble that Collins recovered at the 22.

Alexander caught another big pass for 47 to the Towson 22 that set up a short field goal. The Tigers responded with a 43-yard touchdown run by redshirt junior running back D’Ago Hunter. It was a career long for Hunter.

“D’Ago is not a true tailback, he’s a dual player,” Ambrose said “We use him as best we can, as smart as we can. …He has been growing and growing as a player especially at the tailback position for the entire season.”

On the ensuing drive, Alexander caught two more big passes, the second resulting in a 22-yard touchdown. Matthews fumbled on the first play of the fourth quarter that Albany recovered. Graduate wide receiver Mohamed Jabbie caught a 24-yard pass to set up a Mofor touchdown.

Towson went for it on fourth down and was stuffed. On fourth down Mofor fumbled, a Great Dane recovered but the ball was brought back to the spot of the fumble. On the ensuing drive, Howard picked up 25 down the sideline inside the 30. He capped off the drive with a touchdown.

In the final minute a facemask penalty against the Tigers set up Albany in the red zone. They scored a late touchdown to cut Towson’s lead to 38-24.

“Second half overall gave them way too many opportunities, big plays, chance to get into the ballgame once or twice but we answered the bell.” Ambrose said.

Howard led the Tigers with 19 rushes for 145 yards and a touchdown. Hunter had five rushes for 64 yards and a score while Matthews finished with 15 rushes for 41 yards and two touchdowns. Graduate cornerback Brandon Shuman led Towson with nine tackles including one for a loss. Collins had seven tackles and the interception returned for a touchdown.

“We got the taste out our mouth, we got the win, back in the win column,” Ambrose said. “But we gotta get better.”

The Tigers return home for their last home game of the season on Saturday, November 13 against Elon University. Kickoff from Unitas Stadium is scheduled for 2 p.m.