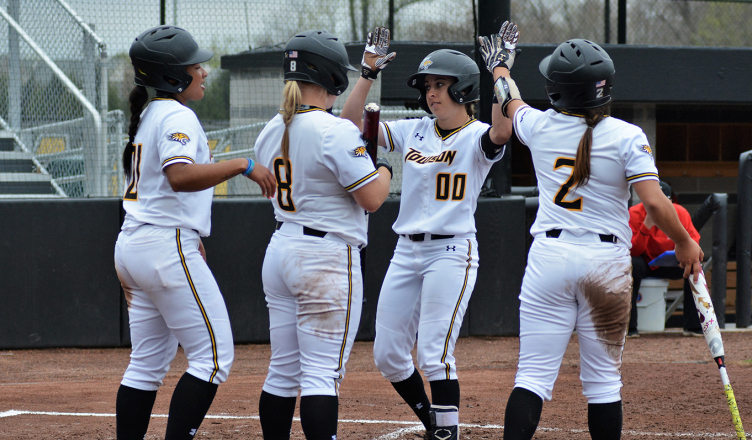 When a team gels and gets on a hot streak, it’s a sight to see. But the worst thing about a winning-streak is that it will inevitably end.

Towson finally felt the sting of defeat as the team had its 10-game winning-streak snapped by Colonial Athletic Association (CAA) foe College of Charleston at Patriots Point Athletics Complex in Mount Pleasant, South Carolina, this weekend.

The game’s lone run came in the bottom of the seventh inning for Charleston off an RBI single.

Game three was full of missed opportunities. The Tigers went 0-for-10 when they had runners in scoring position in the contest.

Senior Megan Dejter (21-5) was the losing pitcher. She had her seven-game winning-streak snapped by allowing the game’s only run through six innings of work.

Saturday, Towson and Charleston split a doubleheader to open the weekend series.

The Tigers pulled out a 3-2 win in game one, but the Cougars came back to even the series with a 15-7 win in game two. The Tigers set a new single-season record for wins with their victory in game one.

In game one, the Tigers plated the first two runs in the top of the third. Senior infielder Brook Miko hit an RBI double to score Scott, which was followed by junior utility Nicole Stockinger’s sacrifice-fly that scored senior infielder Daria Edwards.

Charleston narrowed the gap to 2-1 in the bottom of the third, but Towson continued its strong offensive showing in the top of the fourth when sophomore infielder Madison Wilson singled to score junior infielder Kaylen Minnatee.

The Cougars added another run in the bottom of the fifth, but the Tigers held on to win.

Dejter pitched her 70th complete game of her career in game one, keeping Charleston to just two runs on 10 hits while striking out three.

In game two, the Tigers took an early lead with a five-run first inning. Wilson and Scott reached home off a Miko RBI that the shortstop committed an error on. Minnatee then singled to score senior catcher Shelby Stracher and Miko, and junior outfielder Kendall Arcia hit a fly ball to center to score Stockinger.

Towson plated another run in the top of the second inning off an Edwards single that scored freshman catcher Riley Thies.

Charleston immediately responded, however, with a run in the bottom of the second to get on the board.

The Tigers’ next run was the last of the game, as Arcia singled to score Stockinger in the top of the third.

The Cougars battled back with four runs in the third, eight in the fourth and two in the fifth to seal the win.

Senior Olivia Baltazar (4-3) took the loss after conceding eight runs on six hits in just over an inning of action.

Wednesday, Towson convincingly defeated Delaware State (11-29) in both games of a doubleheader with 14-4 and 10-1 victories, respectively.

On the way to victory, Towson tied its school-record for single-season wins.

The Tigers recorded seven home runs over the course of the two games, with Scott, Stracher and Stockinger hitting two each.

The team will close out its regular season schedule with a weekend series at home against CAA opponent, and No. 24 Hofstra. First pitch of the opening doubleheader is set for noon Friday.