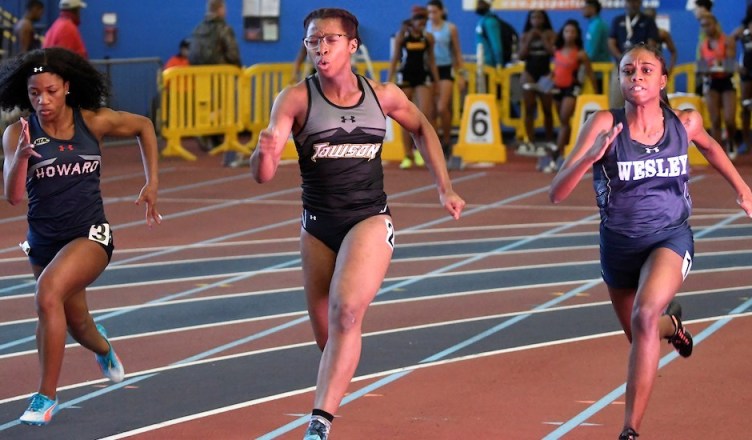 Sophomore Helnsarah Penda placed first in the 60-meter hurdles and was also the lead leg of the 4X200-meter relay team, setting a new indoor school record of 1:43.27.

“She’s been having a great season,” Head Coach Mike Jackson said. “She’s improved tremendously since last year. [She’s] just matured as a student, as an athlete and person on our program, and [we are] just very happy for how she’s been improving this year.”

Penda ran the 4X200-meter relay with sophomore Jamila Brown and juniors Jaina McLean and Rachel Laryea, breaking the previous school record of 1:45.91 that was set in 2010.

Towson’s other 4X200-meter relay team, consisting of sophomore Toni James and juniors Zellie Charles, Druex Collins and Lauren Woods, placed second with a time of 1:45.30, a time that also would have broken the previous record from 2010.

“We have a lot of talent,” Jackson said. “The student-athletes knew going in that they had a great chance to break [the record], and it’s an event we don’t get a chance to run too much, so they were very excited to be able to do it and I was happy with the results.”

Juniors Lauren Coleman and Phontavia Sawyer both qualified for the ECAC Championships in the shot put event. Coleman placed first with a 51-1 mark, while Sawyer came in second with a mark of 46-9.

Senior Ksenia Safonova also qualified for the ECAC Championships after placing first in the weight throw with a 56-1 mark. Safonova also placed third in the shot put with a 41-7 mark.

“Our throwers are outstanding,” Jackson said. “Probably the strongest group on our team right now. Coach [Jeff] Rebholz does a great job with them; I never get surprised when they have good performances. [We’re] just looking to see how they perform when we get to championship season, which I know they’ll do well in.”

Jackson was satisfied with his team’s overall performance this past Thursday.

“I was very excited with what I saw,” Jackson said. “There’s a lot of progress with our team. We have a lot of transfers and new athletes and freshmen who are just continuing the progress over time, and I saw a lot of people competing for our team and it was great to see.”

The Tigers next meet will be the Penn State Tune-Up which will be held at the Multi-Sport Facility & Horace Ashenfelter III Indoor Track in University Park, Pennsylvania, Saturday.