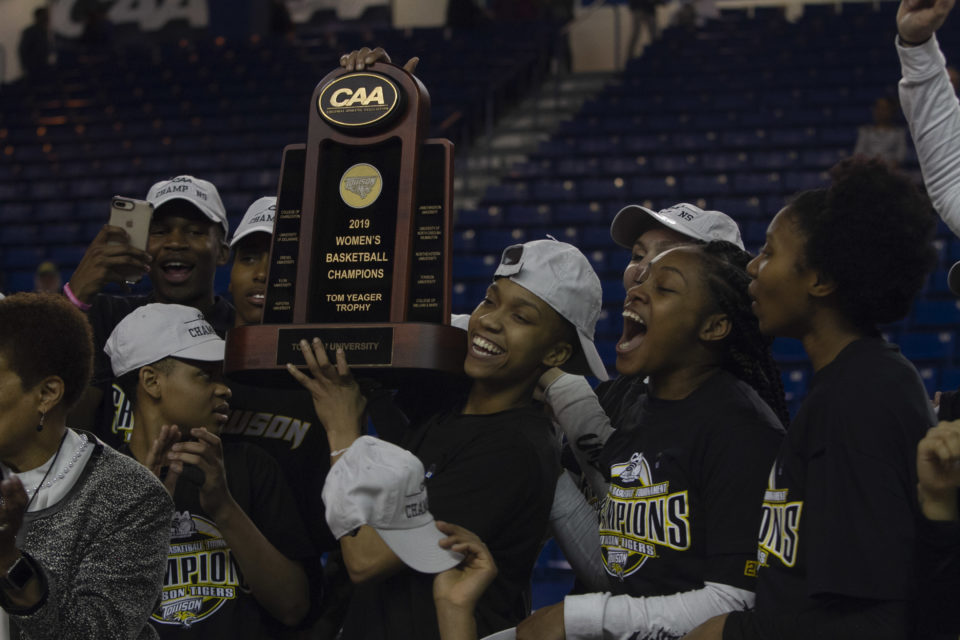 Photo by Tim Klapac/ The Towerlight

An improbable season turned into an impossible run to the championship as the Tigers captured their first Colonial Athletic Association (CAA) Tournament Championship over the weekend. With the title, Towson will play in the NCAA Tournament for the first time in school history.

“I can’t thank these kids enough. I’ve just been blessed with great athletes and great people that really wanted this,” said Head Coach Diane Richardson. “Even at the end, when it looked like it was lost, they fought through.”

The CAA Championship game against the No. 2 seed Drexel Dragons was a rubber-match of sorts as the Tigers split their regular season games with the Dragons.

The first half saw Towson playing from behind most of the time as the Tigers did not take a lead until the final basket of the first half when junior guard Ryan Holder made a layup to put Towson ahead 28-27 at halftime.

In the second half, neither team could gain a two-possession advantage as they battled back-and-forth. Once again, it was Towson taking a late lead, this time on a three-pointer by senior guard Danielle Durjan as the Tigers entered the fourth quarter with a 39-38 lead.

After Drexel took a three-point lead early in the final quarter, the two teams exchanged baskets for over five minutes.

“We knew that there was a lot of time still left in the game and being down three is nothing to us,” said junior forward Nukiya Mayo.

After forcing consecutive turnovers, the Tigers had the ball with 48 seconds remaining, and a one-point lead. Redshirt sophomore guard Kionna Jeter made the play of the season, sinking a two-point jumper to put Towson ahead by three with 25 seconds to play.

“I believe that play kind of broke down,” Jeter said. “I came to get the ball, and I knew that they would switch and trap ball screen. I just took the shot and it went in.”

After the Tigers forced another turnover, it was Mayo’s clutch free throw shooting that sealed the historic 53-49 victory for Towson, a victory that many did not expect would happen at the beginning of the year.

“In the preseason, we came out No. 8 and we knew we were better than that,” Richardson said. “As we got through the season, we talked about staying focused and staying ahead and we end up with this championship.”

The Tigers will wait to find out who they will face in their first NCAA Tournament game when the bracket is revealed on Monday night. Richardson looks forward to however her team learns their fate.

“I think we’re gonna do something because we’ve got a show to watch,” Richardson said. “We’re going to the NCAA Tournament.”

In their first CAA semifinal appearance since 2008, the Tigers squared off against the darlings of the tournament, the No. 9 seed Hofstra Pride. Hofstra pulled off the upset of the tournament with a 57-50 victory over the top seed, James Madison, in the quarterfinals.

Early on, it was a close game as Towson entered the second quarter holding a 14-10 lead. In that second quarter, the momentum shifted in favor of the Tigers. Towson set a CAA tournament record with 29 points in the quarter while holding the Pride to just seven points.

“It was the defense,” Richardson said. “We stepped up, started to be aggressive, stepped in the passing lanes to get some steals and we got steals and run-outs. That kind of fueled us, and we like to be up-tempo.”

Mayo was a force to be reckoned with on the court. She drained three straight three-pointers to spark a 22-0 run, giving the Tigers a 43-17 lead at halftime.

“It was fun, we were having a great time and they were leaving me wide open in transition,” Mayo said. “My teammates always tell me to shoot the ball, so I knocked it down.”

Mayo scored 13 of her game-high 22 points in that second quarter.

The second half was about maintaining their large lead and the Tigers did just that. Although the lead never got below 23 points, Richardson kept her core in the game as Mayo,  Jeter and redshirt junior guard Qierra Murray each played 34 minutes.

“We thought about it, but when you have players like that and you try to get them out, they look the other way,” Richardson said. “They played well, and they’re so used to doing that.”

In what was expected to be the closest game of the quarterfinal round, No. 4 seed Towson defeated the No. 5 seed Delaware Blue Hens 59-49.

Although the Tigers never trailed in the game, the Blue Hens kept it close for the game’s first 39 minutes. The final minute proved to be the difference maker as the Towson outscored Delaware 8-0 in the final 60 seconds.

“It’s really important that we did that in tournament play,” Richardson said. “We’ve had some fourth quarters that weren’t the best throughout the season, but we all knew that we could push through and today we did, and I hope that we stay on that.”

Jeter led the way, scoring 30 points, including the team’s first 10 points of the second half, and grabbing 10 rebounds for her second double-double in two weeks.

The Tigers led by as much as 12 before the Blue Hens slowly chipped away at the lead, getting to within two points with just over a minute to play in the game.

Towson would not give in as Jeter and Mayo sealed the victory with four free throws each to advance to the CAA semifinals for the first time since 2008.

“We got to play with heart, play hard and play together,” Jeter said. “As long as we keep doing what we’re doing, what we’ve been doing all season in conference play, we just got to keep going.”

“It’s great playing for her and we all thought that she deserved it,” Mayo said. “It was a humongous turnaround from previous seasons.” 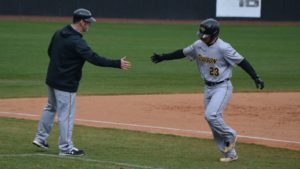 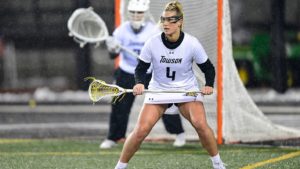