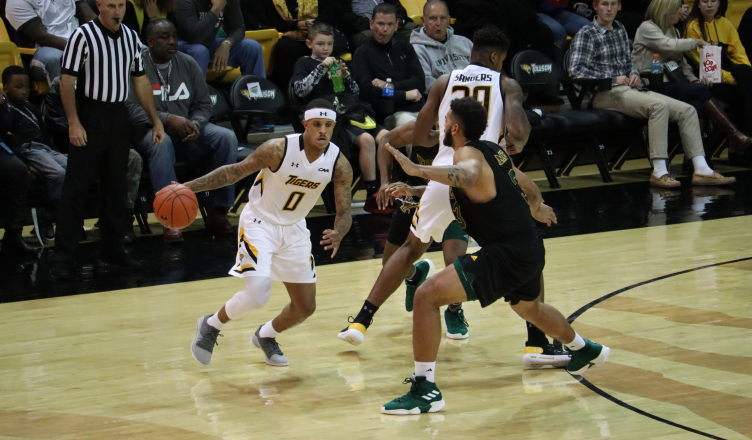 Junior guard Brian Fobbs scored a team-high 25 points in Towson’s late game comeback attempt that fell short as the University of Vermont escaped SECU Arena with a 70-64 victory. The Tigers (2-5) continue to fall in conference standings as the loss drops the team three games below .500.

Despite trailing for the majority of the game, Towson was able to trim an 18-point second half deficit to 67-62 with under 30 seconds remaining in the game. Head Coach Pat Skerry had a positive outlook following the tough loss.

“Vermont is good and we knew they were good” Skerry said. The last couple of minutes when we fought back, we made some errors, but we are playing hard and we are getting better.”

“I’d like to find who is that guy, or two, who can guard wings because that’s what the CAA is,” Skerry said. “We must shore up some of the defensive details. Some of their ball screen action was inexcusable, and obviously I didn’t get the message across, so we’ll get back to the drawing board until that happens.”

Fobbs tied his career-high by scoring 25 points in back-to-back games as he also tallied 25 points in Sunday’s 85-69 win over Loyola University. He has been playing consistently with double figure scoring outputs in three straight games and in four of the last five games for the Tigers. His scoring average has risen to 15 points per game on the season.

Up next, Towson will travel to Washington D.C. to face George Washington on Wednesday night with tip-off from the Charles E. Smith Center at 7 p.m. The game will be streamed live on ESPN+. Fans can access ESPN+ with a seven-day free trial, followed by a subscription fee of $4.99 a month or $49.99 a year, with the ability to cancel at any time.