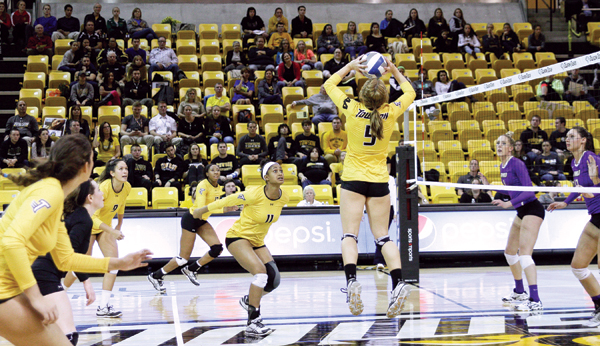 The Tigers (18-2 8-0 CAA) were determined to protect SECU Arena on Sunday and got off to a strong start in the first set.

“We’ve really been working on our mental game,” Junior defensive specialist Camryn Allen said. “[We’re working on] staying tough under pressure and being able to work through tough situations.”

Towson went on a 7-1 run and proved why they’re the top team in the CAA.

Charleston took advantage of an opportunity to catch up and cut the Tigers lead to three points, including two from Towson attack errors. The Cougars kept it competitive for a while, keeping the deficit within four. The Tigers scored three consecutive points to increase the lead to seven, but Charleston responded and the final ten points were evenly split.

The final point came off a kill by Wiers as Towson won the first set 25-18.

Just like the first set, the Cougars scored the first two points of the set, and took an early 3-1 lead. The Tigers responded but could not take a lead for the first half of the set. With a 9-8 deficit Towson scored four consecutive points to take the lead 12-9 off of four straight Charleston errors.

The Tigers made four errors throughout the rest of the set that threatened their lead from slipping away.

“We just need to continue to work on taking care of the ball when it’s on our side,” head coach Don Metil said. “We need to make sure that we’re executing at the highest level that we know that we can do.”

The Cougars kept it close and were only trailing by two points towards the end of the set.

Finckel made two consecutive kills that increased Towson’s lead to four which they kept for the remainder of the set winning 25-21.

For the first time in the game, Towson scored to open the third set scoring three unanswered. Two of the three points came off Allen aces.

Charleston responded and trailed by two a few points later, but a 6-2 run by the Tigers increased their lead to 15-8. Four of these points came from Cougars errors.

Charleston coaches called a timeout after Camryn Allen made her third ace of the set.

The Tigers won the set 25-16 after a block by Ertz and Grassini.

The Tigers took the first set thanks to a pair of runs of four or more points, while the Seahawks (11-6, 1-6 CAA) never scored more than two consecutive points.

Most of the points that Towson had made were from kills by Jarome, Wonders, senior outside hitter Annie Ertz, and sophomore outside hitter Fay Bakodimou.

“Annie Ertz’s back row play is something that sparks us,” Metil said.

The final kill of the set was from Finckel after a Seahawk block error. The Tigers won the set 25-15.

Towson jumped out to an early lead in the second set, opening with a 6-1 run. UNCW made an attempt to catch up after attack errors from Finckel and kills by freshman setter Katie Lanz.

The Tigers responded with three consecutive kills from Wiers, Grassini, and Ertz.

“[The goal] is to do our best and play our hardest,” Wiers said. “We know we can do it in practice.”

The Seahawks fought back in the third set, with kills from six different players. A 7-2 run closed out the set for UNCW, just the Tigers third lost set in conference play.

In the fourth set, Towson had an answer for nearly every Seahawk point, only allowing consecutive scores one time.

Grassini and Wiers combined for seven of the Tigers 19 kills with the assistance of senior setter Marrisa Wonders. Wonders had recorded 15 of her 51 assists in the match-clinching fourth set.

“I like to see our middle stay engaged and our younger players being contributors on the court at such an early spot in their career,” Metil said.

Towson will travel to Boston on Friday Oct. 25 at 7 p.m. to face Northeastern at Cabot Center and will also be facing Hofstra University in Hempstead, New York at the David S. Mack Physical Education Center on Sunday Oct. 27 at 3 p.m.