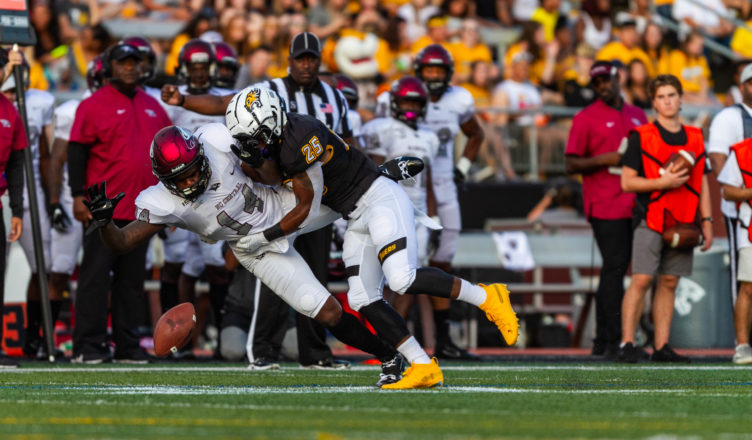 After a tough road win last week, the No. 8/9 Tigers returned home and defeated the NC Central Eagles 42-3 in front of 8,322 fans Saturday — Towson’s biggest crowd since 2014.

“It has been a long time since I looked up and saw a sea of gold of all students, that was an impressive moment,” said head coach Rob Ambrose. “Watching the freshmen run out onto the field was really cool. Having our entire community fill the stands tonight for the home opener was something special.”

Midway through the first quarter, NCCU redshirt junior quarterback Micah Zanders found junior wide receiver Nique Martin for 28 yards and crossed midfield for the first time. Two plays later, Zanders looked downfield and was intercepted by junior defensive back Coby Tippett, who reversed field and reached the 13-yard line on a 52-yard return. This was Tippett’s second consecutive game with an interception

Senior running back Yeedee Thaenrat walked in two plays later for a touchdown to give the Tigers a 7-0 lead. Following an Eagles punt, redshirt senior running back Shane Simpson cut outside on a handoff down the right sideline for 28 yards.

A pass interference flag set Towson up just outside the red zone. Two plays later, redshirt senior quarterback Tom Flacco rolled left and found the pylon for a touchdown. The Tigers took a 14-0 lead into the second quarter and have outscored their opponents 21-0 in the first quarter this season.

The Eagles offense continued to struggle and punted for the fourth time in five drives the next drive. Senior kicker Aiden O’Neill missed a 56-yard field goal on the following drive.

On NC Central’s next play, redshirt senior linebacker Keon Paye intercepted a pass down the sideline and returned it 38-yards for a touchdown. This was the first pick-six for the Tigers since 2015 vs Villanova where they returned two interceptions for touchdowns.

“On [Paye’s] pick, the guys upstairs were yelling into the headset get the offense ready, no, he’s gonna score no doubt,” said Ambrose.

Redshirt sophomore punter Shane McDonough’s 61-yard punt on Towson’s last drive in the first half was a career high.  The Tigers took a 28-0 lead into halftime.

During Towson’s first drive of the second half, Flacco fumbled a snap losing 16 yards, but recovered with a completion to redshirt sophomore wide receiver Darian Street for 27 yards on the next play. A pass to redshirt senior tight end Chris Clark under pressure gained 28 yards. Flacco later lobbed it to a wide-open Street for a touchdown.

Freshman quarterback Davius Richard put the Eagles in the red zone for the first time on a 40-yard pass. The Tigers stepped up and forced a turnover on downs, and Flacco threw a touchdown to a diving Leatherbury, Flacco’s third of the game.

This touchdown set Flacco in ninth place in passing touchdowns all-time for a Tiger with 31.  On Towson’s next drive, redshirt junior Ryan Stover took over at quarterback and on his first play, Thaenrat fumbled and NC Central recovered. At the end of the third quarter, The Tigers held a 42-0 lead.

“This week we actually got into the endzone and we didn’t kick field goals which is nice,” Flacco said.

The Eagles had the ball to begin the fourth quarter and converted on fourth down to enter the red zone. After the drive stalled, NC Central made a 33-yard field goal to get on the board. Towson would run out the clock to put an end to a victorious home opener.

Flacco threw for 228 yards and three touchdowns while rushing for a touchdown. Simpson gained 114 yards of total offense but following his three touchdowns last week did not score in this game. Street and Leatherbury each had three receptions, and together, caught all three of Flacco’s touchdowns.

Fifteen different Tigers caught a pass in the win.

Ambrose said of Paye’s performance that he “had the best first quarter, if not the entire game of his career.”

The Tigers head to Oreno, Maine for a matchup against the defending CAA-champion Maine Black Bears. The game is scheduled to kick off Saturday, Sept. 14 at 7 p.m from Alfond Stadium.

“[The students] had a hand in the outcome of the game by the energy they brought, and I’m grateful that we have this following,” said Ambrose. “These guys earned it.  It is impressive being ranked in the top 10 this early in the season, they’ve earned that right, and we had the following to show it.”