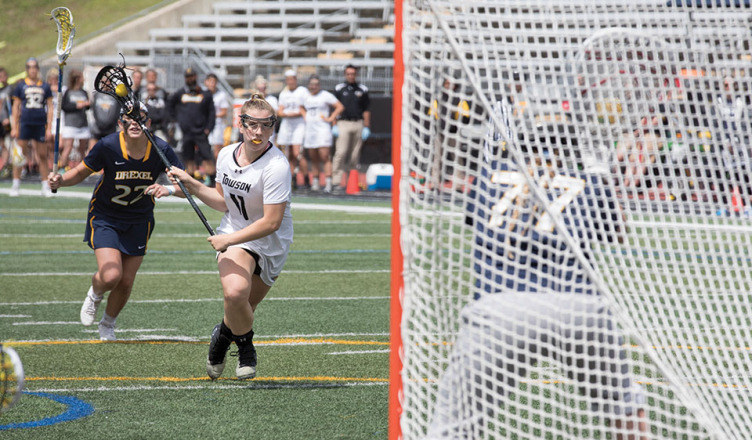 The Tigers (11-5, 4-2 CAA) secured a spot and the number two seed in the upcoming CAA Tournament with their victory.

Towson started the game hot by scoring the first five goals of the contest.

Ferro added her second goal of the day during that opening run, while junior midfielders Kaitlyn Montalbano and Maddie Tribbe also put in goals.

The defense by Towson was swarming in the first half. The team held Drexel without a shot attempt for the first 10 minutes and forced seven early turnovers.

“They played a solid game defensively,” LaMonica said. “We just wanted to make sure we were closing gaps and there was pressure on the ball.”

However, the Dragons clawed their way back and scored four of the next six goals to make it a 7-4 game heading into the break.

Sophomore attacker Carly Tellekamp opened the second half scoring with her 42nd goal of the season at 29:17.

That goal sparked a 3-0 run which gave the Tigers a 10-4 lead with 14:37 to play. Senior midfielder Michaela Duranti scored a free position goal before junior midfielder Emily Gillingham scored off of a feed from junior defender Tianna Wallpher.

Drexel responded with three straight goals which made it a 10-7 game with 4:33 to play, but the team could not complete the comeback.

Towson sealed its victory with a 4-0 run. Tellekamp and Montalbano each scored twice in the final four minutes to secure the win.

Sophomore goalkeeper Angie Benson made nine saves to earn her 10th win of the year in goal. LaMonica pointed to Benson as a key factor in the team’s victories this season.

“We were cheering for her, and she was really firing everyone up,” LaMonica said. “She’s a huge part of our success, and she had a great game when we needed it.”

Despite Benson’s standout performance, LaMonica praised the team’s defensive dominance as a whole.

“We didn’t want to get overextended,” LaMonica said. “They just stayed true to what they were doing.”

Towson closes out the regular season Sunday, April 30, when the team hosts Johns Hopkins at noon. The Tigers will honor their seniors.