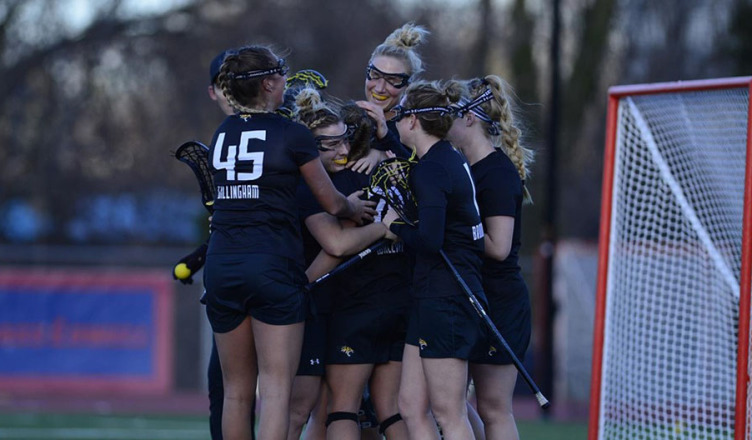 No. 19 Towson defeated crosstown rival University of Maryland, Baltimore County, 20-5 at UMBC Stadium Wednesday for its first victory of the 2017 campaign.

The Tigers offense registered 10 goals in each half. The 20 goals scored by the Tigers are tied for most goals in a game under the reign of Head Coach Sonia LaMonica.

“Emily Gillingham really had a huge presence on the draws tonight for us, which was an area we struggled in for our last game,” LaMonica said.

Gillingham set the tone early with a goal off of a free position shot. She finished the game with four goals.

Tellekamp scored the next two goals to give Towson a 3-0 lead with 26:17 to go in the first half.

“Another standout would be Carly,” LaMonica said. “She’s been pushing to be more aggressive, and I think she displayed more of that tonight. When she does that, I think we’ll see that type of performance from her.”

Towson scored seven of the final nine goals in the first half and took a 10-4 lead into the locker room.

During that run, Tellekamp struck two more times — bringing her total for the game to four goals.

“I challenged the team to come out and compete,” LaMonica said. “I was very pleased from top to bottom. Seeing a lot of players involved in the effort, it was a great team win.”

In the second half, junior midfielder Kaitlyn Montalbano sparked a 9-0 run by scoring off of a free position goal at 24:28.

Sophomore attacker Natalie Sulmonte and senior attacker Samantha Brookhart both contributed two goals and three assists to round out the team effort.

Towson will return to competition when the team travels to Georgetown on Wednesday, Feb. 22. The opening draw is slated for 4 p.m. at Cooper Field in Washington D.C.