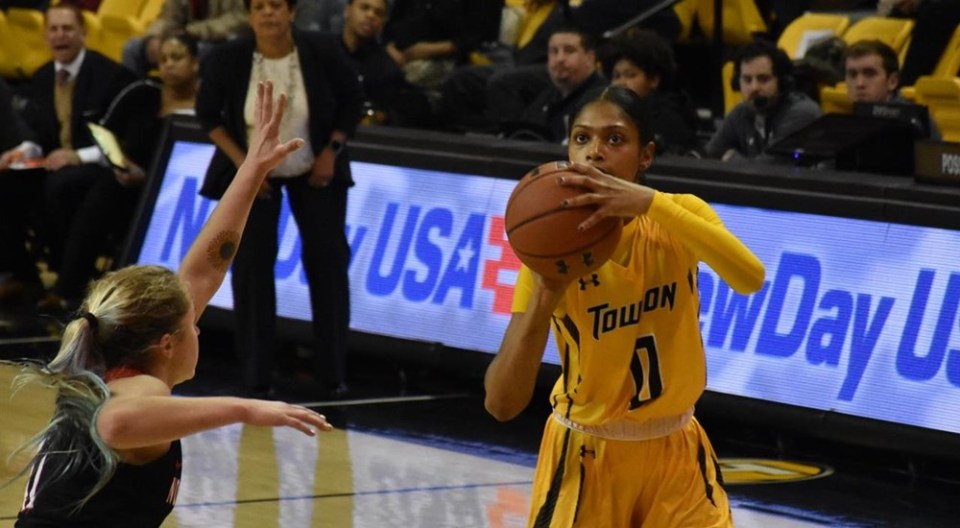 Towson got off to a quick start and jumped out to a 7-0 lead that was capped off by a three-pointer from junior guard Danielle Durjan.

William & Mary answered Towson’s run with one of its own, however. The team outscored Towson 15-5 over a four-minute stretch, and took a 18-14 lead into the second quarter.

Towson fought hard the rest of the way, but foul trouble prevented them from regaining the lead. The team recorded double-digit steals with 14, but it wasn’t enough to overcome the Tribe.

The Tigers couldn’t get anything going offensively, as they were held to just 30 percent shooting from the field.

Despite entering halftime trailing by 20, Towson continued to battle. The team fought hard in the second half and played stifling defense, finishing the game with 13 steals.

“We’ve had some up and down games where, for quarters, we look like we’re not on the court,” Richardson said. “We battled today in every quarter, so that’s an improvement from what we’ve been doing in the last few games.”

On the offensive side of the ball, sophomore Nukiya Mayo led the way for the Tigers. Mayo shot 52 percent from the field, and notched her fourth 20-point game of the season.

Mayo is averaging just over 12 points per game and stands as Towson’s second leading scorer behind senior forward Mary Cuevas, who averages nearly 14 points per game.

“When Nakaya feels confident, she plays a great game,” Richardson said. “Some days when she’s down, she’s not as confident. We have to kind of needle her a little bit, and it takes a little while to get her jump started, but she did well today.”

Despite Mayo’s strong showing, Richardson would like to see her play more like a true point guard in order to elevate her teammates.

“We want her to facilitate,” Richardson said. “She scored in some very crucial times today and we accept that, but we’d like to get some assists out of her. She turned in a good performance today on the boards.”

Towson used a 10-0 run in the fourth quarter to minimize the deficit, but the team could not overcome its slow start.

“We’ve first got to get healthy,” Richardson said. “Then, we’ve got to fight. Every game in this conference is a fight so we’ve got to go out fighting every single game.”