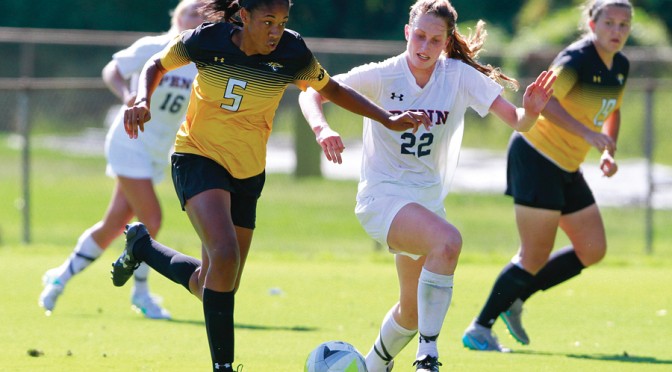 Towson headed back south, crossing over the Mason-Dixon Line to Williamsburg VA for a matchup vs William and Mary. Sunday afternoon provided an opportunity for the Tigers to regroup against an opponent who had been winless in their previous five matches, being outscored 17-4 in the process.

Freshman defender Caroline MacDonald in the 19th minute, broke up a would-be centering pass right in front of the goal before clearing the ball away to safety.

William and Mary took the lead in the 34th minute, when a long free kick sent into the box from near midfield found its way onto the head of a Tribe player who guided it past sophomore goalie Delaney Mitchell.

Mitchell was called on early in the second half of a game to make solid stops one after another. In the 57th minute, the Wilmington N.C., native make a great reaction save, going down low to block a dipping volley from a shot she came to meet near the end of the penalty area  during a 1 on 1 breakaway. Five minutes later, she stretched out high to her left standing at her right post as she dove to deflect a well-struck shot away to the other side of goal before it was cleared away.

William and Mary added to their lead 2-0 with just under 16 minutes remaining. Senior forward Christiana Davey gave the visitors some hope in the 88th minute, as the forward hustled to chase a bouncing through ball. She beat the goalie to the ball, and sent a high volley over the goalie and into the net.

With only two minutes needed to hold on to their lead, the Tigers came close to tying it up in the final minute as senior midfielder Moriah Wigley got a great feed into the box, as she was swarmed by her defender and the goalie, who prevented what would’ve been a miraculous comeback, handing Towson their second conference loss in as many games.

“You have to come out and be 150 percent mentally ‘in it’ from the first whistle”. Head coach Katherine Vettori said after the Tigers 6-0 defeat at Northeastern.

The discouraging signs began early when the Huskies pounced almost immediately, striking in the 3rd minute Leaving Freshman goalie Lindsey Pazdziorko alone with only one defender to help cover the second attacker.

Northeastern scored two goals in six minutes to increase their lead to 3-0.

“I mean, I think that they scored everything they shot,” Vettori said. “It was very poor defending on our part. And we didn’t capitalize on our chances.”

The Huskies soon added to their lead with a fourth tally in the 24th minute coming off a centering pass fired first time near the penalty spot from a pass delivered from the right wing outside the box.

“We knew that they were gonna come out strong and they’re at home off of a four-overtime game.” Vettori said. “They lost the last game on Sunday and they had a statement to make and we didn’t match their energy.”

A fifth goal from a free kick rebound was added with 11 minutes remaining before the half, as the midway point proved a much needed breather for a team that had just faced a whirlwind of offensive pressure.

Mitchell came in for Pazdziorko entering the second half and in a similar fashion, was called on early and often to make solid saves, many just in front of the goal.

“I was pleased with the effort [in the] second half,” said Vettori. “Delaney had a really good second half in goal and we played with more passion- and we have to bring that in every single conference game.”

Mitchell would finish the game with 7 saves on 8 shots.

“Yeah it is demoralizing when you give up easy goals and can’t put it in the back of the net, but you know, we stayed with it and created some good chances, had some better possessions in the second half and again, it was Northeastern’s day and they were relentless.” said Vettori

Northeastern would add a sixth goal on the afternoon after Mitchell’s initial shot from a sharp angle rebounded across goal to a nearby Huskies close to the left post, guiding the ball into an empty net.

Northeastern outshot the Tigers 26-9 including 15 on goal. Towson despite the loss had a 9-6 advantage in saves.

“Its just one game at a time,” Vettori said. “And the nice thing is we now need to learn from this, put it behind us and focus on Sunday, and William & Mary at their place is not going to be easy. No game will be easy but we have to take it one day at a time and get back to work.”

The Tigers return home to face UNC Wilmington on Senior Day, Sunday, Oct. 6 at 1 p.m. from the Tiger Soccer Complex.