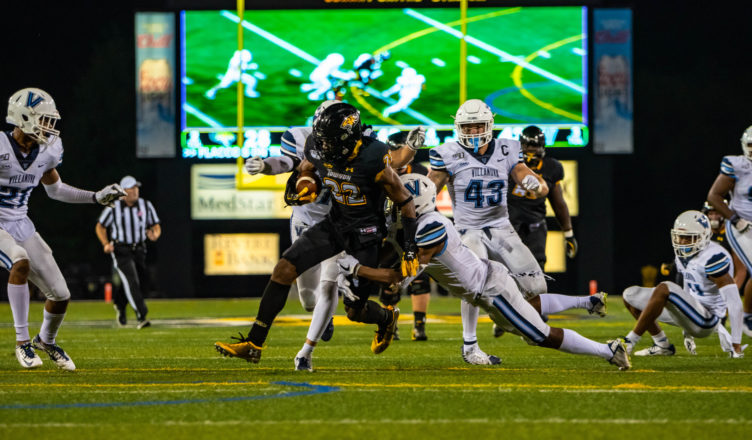 The No. 5 Tigers fell to the No. 18 Villanova Wildcats 52-45 in overtime in what may have been the game of the year.

“Hats off to coach Ferrante and Villanova, that is a very, very good football team,” said head coach Rob Ambrose. “They brought their A-game tonight. After last year, we knew that was coming, and they were impressive on both sides of the ball and special teams.”

Despite the loss, the attendance of 8,811 was the 13th-highest in the history of Johnny Unitas Stadium, something Ambrose is thankful for.

“I’d like to thank the Towson faithful, the people who made a lot of noise and made a difference and really enjoyed their Saturday night,” he said. “That’s how Saturday night football is supposed to be. I hope to see you more. that was pretty high entertainment value for your dollar.”

Offensive plays were abound in this game as both teams combined for over 1000 yards of total offense. Villanova’s (4-1, 1-0 CAA) 1-2 punch of junior quarterback Daniel Smith and junior running back Justin Covington proved to be a formidable opponent for the Tigers (3-1, 1-1 CAA) defense, who are tied for first in the nation in turnover margin.

Smith added to his conference-leading passing touchdown total, throwing for four while compiling 279 passing yards, along with the game-winning touchdown run in overtime. Covington, who leads the nation in rushing yards, ran for 195 yards and one touchdown.

“[Simpson and Allen] are talented players,” Flacco said. “It’s next man up, tonight we can lament on the loss but tomorrow we gotta learn from it.”

Flacco totaled 414 yards of offense, including a 42-yard touchdown run, and Leatherbury was the leading receiver for the game with 118 yards and one touchdown. Senior running back Yeedee Thaenrat, starting for the injured Simpson, did contribute three touchdowns on the ground, but managed just 32 yards on 10 carries.

The Tigers defense surrendered three touchdowns of 25+ yards and failed to get the Villanova offense off the field as the Wildcats went 12-19 on 3rd-down conversions and 2-2 on 4th down conversions.

“We were bad on third down, you gotta stop them,” Ambrose said. “You have to take advantage of your opportunities. We had tons of opportunities to win this ballgame and we gave it away.”

Both 4th-down conversions were on Villanova’s game tying drive at the end of the fourth quarter.

“We were out of position, on some plays they were just more physical than we were,” redshirt senior linebacker Robert Heyward said.

Heyward did make a big play for the defense, intercepting Smith on a dropped pass and taking it 49 yards for a touchdown to tie the game at 42, electrifying the fans and capping a 17-0 scoring run for Towson.

“It was a good play, ran a screen play,” Heyward said. “[Villanova] dropped it, I ended up with it.”

Once overtime began, the energy was heavy on the Wildcats as Covington ran the ball down to the Towson two-yard line on the first play of the extra quarter; Smith would score on the next play.

The Tigers will look to rebound on the road as they travel to Gainesville, Florida to face the Florida Gators of the FBS on Saturday, Sept. 28. Kickoff from Ben Hill Griffin Stadium is at 4 p.m. and the game can be watched on the SEC Network.