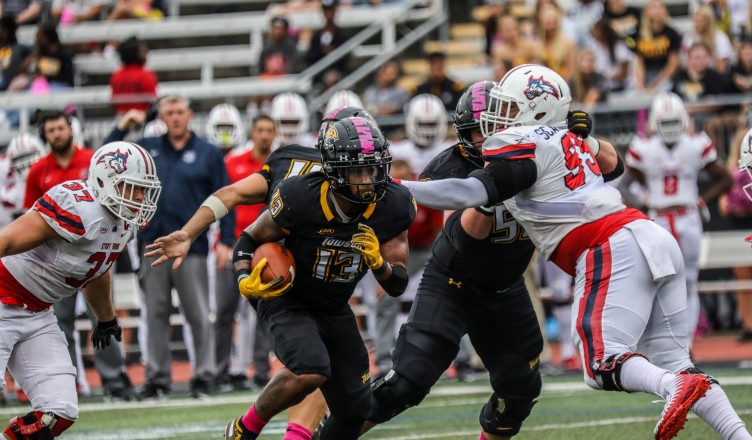 Donning pink-stripes and pink socks, the No. 23 Tigers in the nation, entered Johnny Unitas Stadium .

Towson took on the No. 13 Stony Brook of Stony Brook and started the game hot. Redshirt junior running back Shane Simpson scored twice in the first quarter, 96 yards on the opening kickoff and on a short touchdown run. Redshirt junior quarterback Tom Flacco also found redshirt sophomore tight end Chris Clark for a score in the quarter to put the Tigers up 21-0 early.

Head Coach Rob Ambrose emphasized getting off to a hot start to keep Stony Brook off balance early.

“As long as we’re scoring points it puts the other team out of their comfort zone,” Ambrose said.

Senior quarterback Joe Carbone connected with wide receiver Marshall Ellick to put the Seawolves on the board. On the ensuing drive, sophomore running back Kobe Young fumbled and Stony Brook capitalized with a touchdown to make it a one possession game.

After two unproductive possessions from both teams, Simpson returned a punt near the red zone to give the Tigers another scoring chance midway through the period. Flacco found Clark for a second touchdown, and hit redshirt junior wide receiver Brent Richardson on a 30-yard strike to give Towson a 35-14 lead going into halftime.

Towson remained aggressive to start the second half, forcing a fumble on the opening kickoff to give Flacco the ball near the red zone. The Tigers were held to a field goal, increasing their lead to 38-14.

They forced another fumble after senior linebacker Diondre Wallace made a play on the ball. Junior running back Yeedee Thaenrat took advantage of the turnover with a 10-yard touchdown run, extending Towson’s lead to 45-14. This is the first time the Tigers have scored 40 or more points in three straight games in program history.

Stony Brook finally responded with a touchdown as senior running back Jordan Gowins found the end zone, but Towson was able to hold on for the win.

“I’m very proud of our players coming off a physical game last week,” Ambrose said. “Stony Brook is a great football team, there is a reason they are ranked as high as they are. I’m very proud of our guys, coaches, support staff, this is bigger than just the guys in the locker room. This is everybody. This is a big win.”

Towson finishes their three game homestand against William and Mary. Kickoff is at 4 pm at Johnny Unitas Stadium.