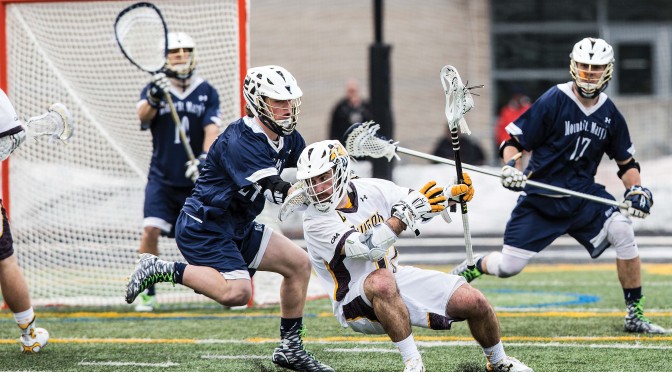 “I’m excited to get our second win of the year,” Head Coach Shawn Nadelen said. “We knew Mount was going to come in here with a lot of excitement and a lot of energy. I knew our guys were focused and prepared after putting in a pretty strong week of practice. It was something for us to come out here and be able to handle some of the adversity we faced.”

Both teams struggled to get on the board until junior midfielder Mike Lynch scored the first goal of the game midway through the first quarter. However, Mount St. Mary’s (1-1) responded with a goal before the quarter ended and both teams remained deadlocked at 1-1.

Towson had 11 shots in the first quarter, but had a tough time against goalie Matt Vierheller, who finished with a game-high 15 saves.

Things clicked for the Tigers in the second quarter as the team went on a 4-0 run and took a 5-1 lead with three minutes left in the half. The run started with a fake pass from sophomore attackman Ryan Drenner, who then put the ball into the back of the net.

Drenner finished with a game-high three goals and is now tied with fellow junior attackman Joe Seider with a team-high four goals on the season.

“I just think a lot of our key things on offense is shots on volume and this year we’re focused on making sure those shots count,” Drenner said.

Towson came out in the second with a 5-3 lead and went ahead 6-3 after a man-up goal from redshirt freshman attackman Ian Kirby. Kirby is the Tigers extra-man specialist who comes in to the game when the team is up a man.

“I kind of like the job,” Kirby said. “It’s fun putting that in my repertoire.”

Mount St. Mary’s attempted its comeback in the fourth quarter after a goal from Ryan Lamon cut Towson’s lead to 7-5 with 13 minutes left in the game.

The Tigers held on though, as senior midfielder Ben McCarty found Lynch in front of the goal, who put the ball in the net for his second goal of the game.

Drenner finished off the game with an unassisted goal for the hat-trick in the last minute of the fourth quarter.

Towson’s defense played its role in the team’s win, after it forced 15 turnovers from Mount St. Mary’s and only allowed the team to have a 13-of-19 clear-rate.

“It’s kind of how we’re planning to play all year,” redshirt senior goalie Tyler White, who finished with eight saves, said. “Everyone is comfortable out there, people are flying around and we want to be able to fly around the field, cause turnovers, get the ball and get out of there.”

The Tigers finish off their three-game home stand on Saturday against the Georgetown Hoyas (0-1) at noon.