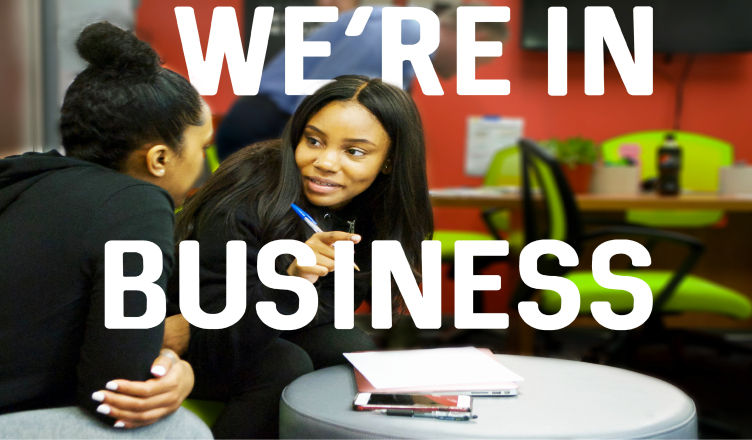 Mike Cooke, CEO and co-founder of Sterling Forever, recently found his jewelry company thrust into the spotlight after his business was featured on Good Morning America’s “Deals and Steals” segment.

Cooke, a Towson alum, said that being featured on the segment “was a huge success, there was an abundance of sales in just 48 hours,” and he is working with the show on what could be two more segments.

“It’s just going to be some of our best sellers,” Cooke said. “They put them on TV and they talk about the company and they discount them for like, a 48-hour period, kind of like a flash sale. It is a flash sale. But the volume that that exposure produces is immediate and long lasting.”

Cooke co-founded Sterling Forever while he was still a student at Towson. Now, Towson University is helping current TU students flesh out their business ideas.

The Student Launch Pad, located on the fourth floor of Cook Library, is a hub for student entrepreneurs to help them improve new ideas and gain inspiration.

The Launch Pad holds events like Creative Mondays, Lunch and Launch, and an Entrepreneurship Unplugged series in which local entrepreneurs come to campus to talk about their experiences.

For Cooke, it’s never too early to start thinking about a new business idea. He got his start in the jewelry business long before Sterling Forever came to fruition. Cooke started to sell jewelry on eBay when he was 15, after his mother decided she was done with some of hers and gave it to him to sell.

“I sold the jewelry on eBay, and overnight I made a few hundred bucks because it was Tiffany jewelry, so then that worked and I continued,” he said.

Cooke began to import jewelry from China to sell on eBay until he built his first e-commerce website, Overstock Silver. Though the business was successful, Cooke admitted to making mistakes.

“I continued to import jewelry and sell it and market it, and that was kind of the beginning of ecommerce, and had a somewhat successful business,” he said. “But because I was very distracted in high school and trying to get good grades, I pretty much made every mistake in the book. I was just young and didn’t know and continued to fail, but still made money.”

According to Cooke, the company lasted throughout his high school career, spilling into his first couple years of college. It wasn’t until his sophomore year that Sterling Forever would originate and push him to where he is now.

“I continued to operate Overstock Silver at the beginning of college, and then sophomore year of college I was in Los Angeles for business, and one of my competitor’s marketing directors just left,” Cooke said. “I followed her on LinkedIn and saw that she had just left, and I messaged her and scheduled a meeting with her and asked her if she would start a new business with me.”

Since the company started in 2012, it has only continued to grow. Lisa Simmons, a lecturer in the College of Business and Economics and one of Cooke’s former professors, finds Sterling Forever’s success exciting.

“As a teacher, nothing makes me happier than seeing students thrive,” Simmons said. “Mike’s success makes me beam with pride.”

Sterling Forever has seen a lot of success recently, including opening a sales showroom in Cooper Design Space located in Los Angeles, getting into Urban Outfitters, and creating a deal with ABC. Sterling Forever has also made its way into Nordstrom, which Cooke said is “one of our biggest accounts, and continues to be a great account for us.”

Cooke said Simmons was the professor who showed him the dual track in business administration and human resource management that would become his course of study during his time here at TU.

“If we would have had an entrepreneurship major in 2012,  I would have directed him towards that major,” Simmons said. “Since we didn’t, I recommended human resource management based on his interests.”

Simmons advises aspiring entrepreneurs to make sure they staff their business with three specific employees, who each fulfill an integral role.

The Student Launch Pad staff is made up of mostly student associates, including Evelyn Atieno, Matthew Lowinger and Folakemi Awe.

“If you have an idea, you can work one-on-one with the associates there to bring your idea to fruition,” Atieno said. “We work with you starting with your first idea till the final product is finished…. We are more than just about having already successful student entrepreneurs. We welcome people without any ideas and we work with them to develop some.”

Atieno, an international studies major, has been an entrepreneur since she was 14 when she realized her blog was making her money.

“I gained over 30,000 followers and I was able to make money from ads on it,” she said. “As I grew old, I realized that I can buy expensive clothes really cheap and make five times more, so I did that throughout high school.”

Atieno also started her own magazine, Affinity Magazine, when she was 16 years old after she realized there was a lack of publications that were “written exclusively for teens by teens.”

Atieno said her magazine, which has gotten press from Huffington Post, Teen Vogue, and the Baltimore Sun, “rapidly grew in the past year.”

“We introduced our one minute videos last month and so far they average over 100,000 views,” Atieno said. “I’m now just working on getting some seed capital and expanding it more and doing original programming.”

As an associate for Towson’s Student Launch Pad, Atieno works on marketing the program. She also runs the Launch Pad’s social media.

“We are now starting to create video content to really highlight student entrepreneurs on campus,” she said.

Atieno likes working for the Launch Pad because she gets to talk to other students about entrepreneurship and has fun doing it.

“I would recommend it because it’s really flexible and a fun experience,” she said. “I get a lot of joy from just talking to students. Usually there’s an application open every semester for Launch Pad ambassadors.”

Atieno said her best advice for aspiring entrepreneurs would be to “focus on your path.”

“In life, we look to other people to be our blueprints, but the reality is we all move at different paces and shouldn’t compare ourselves to others,” she said.

Lowinger then met Jan Baum, director of the entrepreneurship minor at Towson,  and started working at the Launch Pad.

“I’ve consulted a lot of entrepreneurs and people and they are life changing,” he said. “I love meeting the brightest minds behind the innovations.”

“I started freelancing a couple of years ago to gain experience while still in school,” she said. “As a result, I learned more about the basics of starting and growing a business. I believe that we are all learners and teachers.”

Awe is currently working on rebranding the Launch Pad “to better represent our innovative aesthetic and creative workspace.”

“I am excited about this project because I get to apply my skills and passion for brand design,” she said.

Before transitioning into academia, Towson University President Kim Schatzel started her career journey in the business world where she eventually became the president and COO — and later CEO — of a multinational industrial firm.

Schatzel urges entrepreneurs to foster relationships early on in their business endeavors.

“When there’s a mistake or something goes wrong, that’s when you wish you had the relationship with whoever you’re working with or somebody that’s a client,” she said. “Well, that’s not the time to build a relationship, when everything’s going south. You build relationships before you need them and hopefully you don’t have to ask for support or forgiveness over something.”

Schatzel said being an entrepreneur can be lonely, but that it doesn’t have to be. She told young entrepreneurs to find mentors who can help guide them, and select employees who they can trust and depend on for areas they aren’t as strong in.

“I got used to leading organizations towards an organizational goal, as well as building relationships with both my employees as well as different partners that I had to develop,” she said. “In business there’s a phrase that ‘going alone is faster; going with others is farther.’”

Cooke also offered advice to young entrepreneurs, in which he stressed the importance of never giving up.

To Awe, entrepreneurship is a mindset to create, build, and grow. She recognizes the obstacles that many entrepreneurs face, but sees the benefits of taking risks.

“Entrepreneurs are able to recognize opportunities everywhere in order to make lives and experiences better,” she said. “Successful entrepreneurs take risks and encounter failure; however, they persevere.”

Awe said entrepreneurs should always ask questions and seek out opportunities and resources.

“Also, be patient with yourself and your journey,” she said. “Rome was not built in a day.”