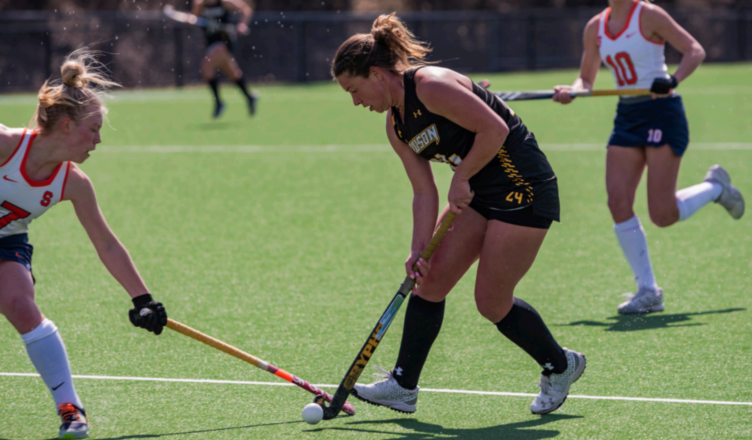 Many fall sports teams at Towson University (TU) found their seasons postponed in fall 2020 for them to then be rescheduled for an abridged spring season. Teams that would normally play in the fall like the Women’s Soccer team, Volleyball team, Men’s and Women’s Swimming and Diving, and Field Hockey team all played in the spring.

With the COVID-19 pandemic raging on, the Tiger’s fall athletics teams that chose to compete in the spring found success in simply playing their respective sports.  These teams have recently wrapped up their seasons and are now preparing to play again in the fall.

“I think that the student athletes are in a really good place fitness wise,” Vettori said. “Hopefully we’ll go home and, and get a little downtime, but then get back to work. And hopefully, we can be more fit than we’ve ever been before coming in with the shorter turnaround.”

Field Hockey Head Coach E.A. Jackson is excited about the upcoming fall season as well since the team has had consistent training since the beginning of the fall. She also cited having almost all the starting lineup from last year returning as a reason to be excited.

“I think the advantage is we’ve been able to train all fall and all spring without any fits and stops.” Jackson said.

According to TU Field Hockey junior defenseman Kasey Bubel, her and her teammates are focusing on rest in preparation for next season.

“I think noticing that a little relaxation will actually help you in the long run,” Bubel said. “We’ve been on the go since last March, whether it be on zoom or in person. So giving ourselves a little break for muscles, to heal up mentally, relax during finals, get the academic side done. And then starting in mid May, we’ll start up our summer packets and start conditioning and getting back into shape for next season.”

Bubel shared her excitement with returning to play in the fall, along with continuing the team’s momentum from last season.

“Honestly, I’m pretty excited,” Bubel said. “And knowing that we have a lot of the starters and girls coming back from this past spring to the fall. We can kind of just keep running where we left off, and hopefully keep on building like we were the spring.”

Recruiting has taken a hit during the pandemic. Vettori said that a dead period was imposed in March 2020. During a dead period, college coaches are not allowed to have any face-to-face contact with potential college student-athletes or their parents and cannot watch athletes play or visit their high schools.

“We’ve had to be creative,” Vettori said. “We’ve had to watch a lot of video. You know, I’ve done a lot of facetiming with recruits. It’s just a different way of recruiting without having to get them on campus for unofficial or official visits.”

Coach Jackson has also taken a different approach to recruiting during the pandemic. She felt that a lot of recruits are being pushed to commit to programs without being able to take visits. Jackson said she cannot offer roster spots for players who have not met the team or even been to campus.

“I have been very intentional about pausing our recruiting process, the only athletes we have been in constant contact with are athletes that we knew before,” Jackson said.

While the recruitment process has been different, Jackson isn’t concerned about the rapidly approaching season.

While TU Field Hockey plays at a high level, their games and film from the spring will be helping them prepare for the fall season.

“But we’re at a division, high performance level, right?” Jackson said. “There’s a certain sort of standard and expectation for performance. So I don’t really see it as a quick turnaround. I see it as we have some really great film that we can start off instantaneously this fall and watching and building off of.”

Unlike the Women’s Soccer team, who completed eight games, the Tigers Volleyball team went 6-1 during the regular season while undergoing numerous cancellations and postponements. The team went on to win the CAA tournament before falling to Dayton in the NCAA tournament.

The TU Field Hockey team, while posting a 2-6 record this season, had four out of their eight games decided by one goal.

“It was really reinforcing to me that our team was able to continue to train without getting shut down,” Jackson said.

“Whether score lines, look at or not, the growth in our play had been super awesome,” Bubel said. “So I think once we make that peak of winning more than just one CAA game, we’re going to be an unstoppable force because the girls on this team are so ready to keep growing and show not only the CAA, but the NCAA, what we can do. I’m really excited to see what this fall will bring.”