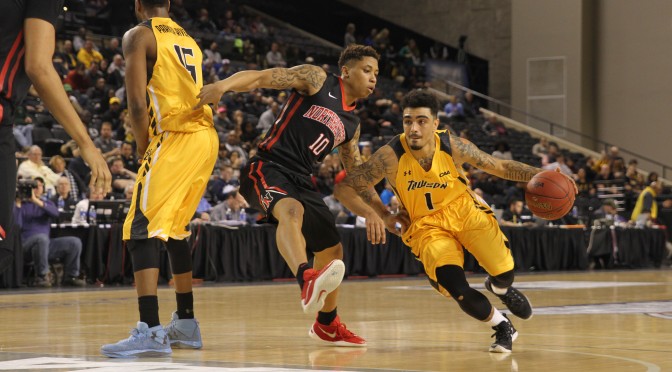 Towson saw its season come to an end Saturday night at Royal Farms Arena in Baltimore after falling to Northeastern in the quarter-finals of the Colonial Athletic Association (CAA) Tournament 71-60.

“Obviously it’s a tough loss,” Head Coach Pat Skerry said. “Anytime you lose a game in the conference tournament it’s a tough loss. Credit to Northeastern, we just got out of sorts defensively in the second half.”

Senior forward Timajh Parker-Rivera later tied the game 6-6 on a dunk in transition for Towson.

Following a 3-pointer from sophomore guard Eddie Keith II, the Huskies went on a 5-0 run to take an 11-9 lead over the Tigers.

At the midway point of the first half, Towson and Northeastern were deadlocked 13-13 after sophomore guard Byron Hawkins put in a layup.

The teams went back and forth at the end of the first half and Keith II hit a layup with 1:57 left to put the Tigers ahead 32-29 after the first twenty minutes.

Towson shot 45 percent from the field in the first half, including seven points from Keith II and six points apiece from Moto and Parker-Rivera.

“In the first half I thought they [Towson] really did a nice job of getting on the glass and creating some extra opportunities for themselves,” Northeastern Head Coach Bill Coen said.

In the early stages of the second half, both teams battled back and forth until Northeastern went on a 7-0 run to take a 47-40 lead. The Huskies capitalized on two Tiger turnovers and a foul on junior forward John Davis to extend their lead.

Midway through the second half, the Huskies continued to hound the Tigers and took a 53-46 lead.

Northeastern shot 61 percent from the floor in the second half and clamped down defensively allowing them to outscore Towson by 14 points.

“We just didn’t guard well enough win,” Skerry said. “We made to many errors defensively, and we obviously couldn’t get to the foul line for whatever reason.”

Towson will wait to see what postseason tournament it will play in as the rest of conference championships conclude, but Skerry is anxious for the team to make a run at the NCAA Tournament next season with 12 players returning.

“[Next year] The goal is to win the championship and go to the tournament,” Skerry said. “Obviously we’re going to play in something this year, we just have to wait and see how things shake out. We’ve got a good core coming back [next year] and that’s exciting, but I’d like to see with so many guys coming back if we can get into something else.” 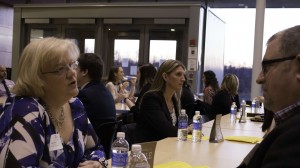