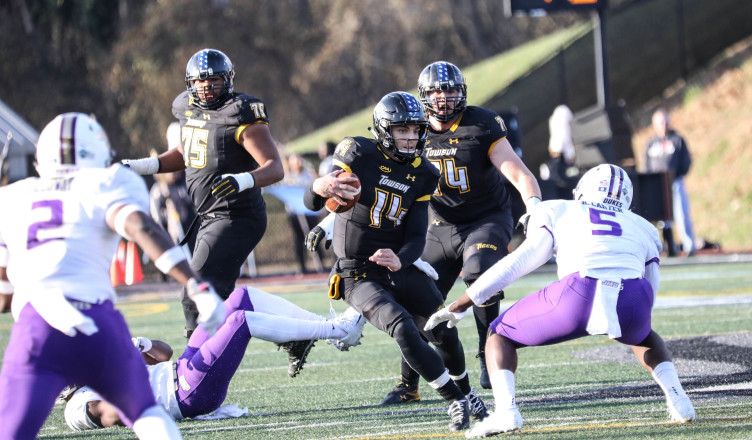 The Tigers returned home to Johnny Unitas Stadium for senior day and their final regular season game against No. 7 James Madison. In its first matchup since 2015, Towson (7-4, 5-3 CAA) gave up 24 unanswered points and could not respond in a 38-17 loss.

Head Coach Rob Ambrose looked to send the seniors out with a win, but was happy for each of them.

“I’m very proud of our seniors coming from where they came from to pull off the year they did,” Ambrose said. “As I handed them rings today, I told each of them welcome to the club. They are Tigers for life and they’re in the family. I’m proud of who they are and what they will become as men.”

James Madison (8-3, 6-2 CAA) got on the scoreboard midway through the first quarter as graduate running back Cardon Johnson sprinted up the middle 76 yards for a touchdown .

Redshirt junior quarterback Flacco responded with a scramble up the middle of the field for 50 yards to set the Tigers up inside the red zone. Sophomore running back Kobe Young added to the Tigers’ momentum churning his legs for 13 yards with multiple defenders trying to bring him down.

On Towson’s next drive, Flacco found a wide open sophomore wide receiver Jabari Allen down the left sideline for a 68-yard completion. Junior kicker Aiden O’Neill capped off the drive with a 26-yard field goal.

The Dukes emphasized the ground game on their next drive, as senior running back Trai Sharp and redshirt junior quarterback Ben DiNucci combined for 88 yards on 10 carries. Dinucci finished the drive off with a nine-yard rushing touchdown to regain the lead. He added another short rushing score on their next drive to extend the lead to 21-10.

James Madison added a field goal just before halftime to take a 24-10 advantage into the break.

The Tigers drove inside Dukes territory coming out of halftime, but a failed fourth down conversion gave the visitors the ball.

Despite the turnover, the momentum of the game shifted towards Towson as redshirt junior linebacker Ricky DeBerry and redshirt sophomore defensive lineman Bryce Carter sacked Dinucci to reenergize the crowd.

DiNucci answered with a 31-yard run late in the quarter to set his team up in scoring position. Sharp found the endzone on a 15-yard rushing touchdown to seal the win.

Despite the loss, Towson earned a playoff berth. The Tigers will host Duquesne Saturday afternoon at Johnny Unitas Stadium with kickoff set for 2 p.m.