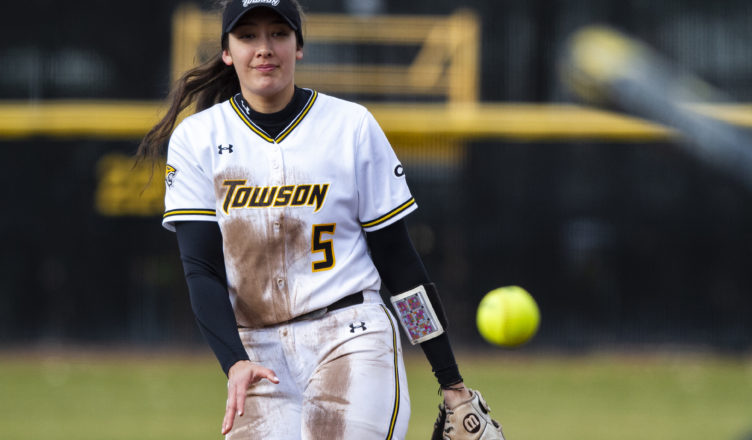 Towson made their home debut in the Demarini Tiger Clash, finishing the weekend with a 3-1 tournament record with wins against La Salle, Iona, and Stony Brook.

It was deja vu for the Tigers (9-7) in their final game of the weekend as they once again went to extras for the fourth time this year. Senior first baseman Madison Wilson drove in the winning run in the bottom of the 8th to give Towson the win over the Seawolves (10-4). Wilson finished with six RBI in four games of the tournament.

“Madison was getting it done on both sides of the ball today,” head coach Lisa Costello said. “She made some great plays out there.”

The Tigers fell behind early 2-0 to Stony Brook in the third after giving up a two-run homer. It took until the bottom of the fifth for the Black and Gold to respond, as sophomore infielder Gracyn Houmis and freshman outfielder Lauren Ringhiser both hit RBI singles. Tied at 2-2, the game went to extras, sophomore outfielder Nicole Kidwiler hit a double and Ringhiser advanced to third. Wilson’s sac fly two batters later gave Towson the win.

“We just need to focus on putting together good at-bats,” Costello said. “Whenever we fall behind we ask ourselves ‘What do we need to do at-bat, how do we adjust?’”

The Tigers played a doubleheader against Iona, they won the first game 3-0 but fell 5-1 in game two. In the second game against the Gaels (2-6), Iona outhit Towson 7-2. The Gaels led 3-0 through four innings led by a two-run home run.

The closest the Tigers came to a comeback was Wilson’s RBI double in the bottom of the 4th, which brought Towson within two. Iona pulled away in the top of the fifth taking advantage of an error by senior utility Julia Smith-Harrington. On the mound, redshirt senior pitcher Ashley Cruise went 3.2 innings allowing four hits and three runs.

“We didn’t adjust well,” Costello said. “Their pitcher did a good job shutting down our offense and preventing us from getting on base. We just needed to adjust better.”

In game one vs Iona, sophomore pitcher Sara Johnson and Gaels senior pitcher Marnie Skinner engaged in a pitcher’s duel for the first four innings. Neither pitcher allowed more than three hits through four innings. A two-RBI base hit from Johnson in the bottom of the fifth gave the Tigers a 2-0 lead. Towson added a run in the bottom of the sixth after Ringhiser hit an RBI single. Johnson would finish the game with a complete game shutout, striking out 10 Iona batters.

“Our pitchers are starting to pitch more than just throw,” Costello said. “Their hitting spots are changing, and they’re changing speeds.”

The Tigers began the weekend with a 9-3 victory in their home opener over La Salle (0-8). A two-RBI base hit helped the Explorers take an early 3-0 lead in the top of the first. It would be their only lead of the day, as Ringhiser tied the game with a two-RBI single. Towson took the lead for good in the bottom of the third off a La Salle error, and never looked back.

“We did some things well,” Costello said. “But we also have some things we need to clean up. I have noticed that there is no quit in this team.”

After sophomore infielder Chloe Poulich hit her first home run of the season in the bottom of the fourth, the Tigers added three more runs the following inning. Smith-Harrington hit a triple and scored after freshman utility Sam Carson hit one deep into center field. Wilson and Houmis each collected an RBI in the inning. Wilson ended up inadvertently scoring the final run of the day after she was hit by a pitch with the bases loaded in the bottom of the sixth.

Towson remains at home next week as they host the Tiger Invitational Tournament. The Tigers will face off against Morgan State on Friday, March 13 at 3 p.m.