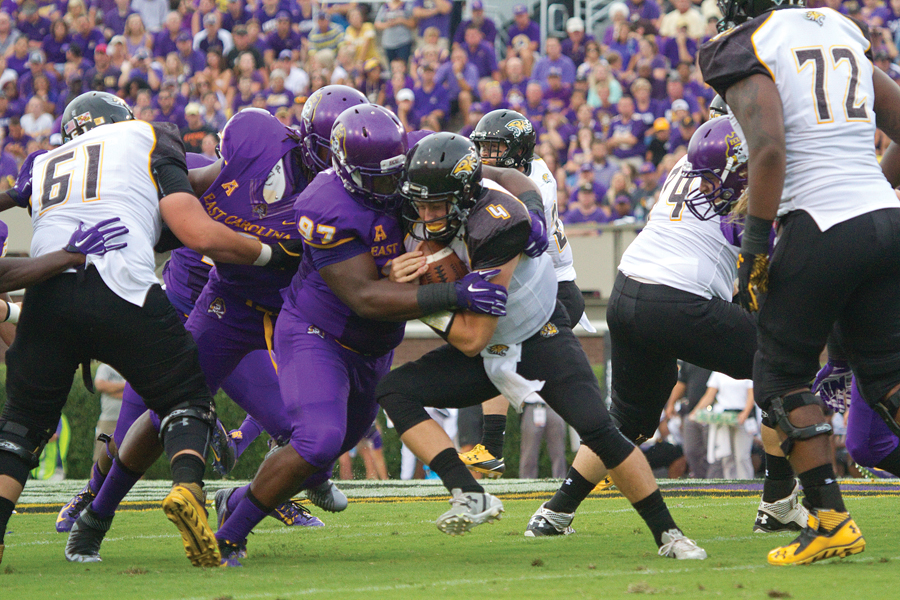 Towson lost 28-20 to East Carolina in its first game of the season on Saturday, despite having 416 yards of total offense.

The Tigers (0-1) had a chance to tie the game in the last two minutes, but their drive was stopped when a hit jarred the ball loose on a pass attempt on fourth down at the Pirates’ (1-0) 16-yard line.

“If you could be proud in a loss, I am,” Head Coach Rob Ambrose said according to TowsonTigers.com. “It is one of the most hostile environments to play in college football.  To come down and have a chance to win in the fourth quarter, I couldn’t be prouder of their fight, how much they love each other and how hard they work together.”

The Tigers found themselves down 28-13 with 12 minutes left in the fourth quarter after Pirates’ running back Chris Hairston scored his fourth touchdown of the game.

However, Ambrose stuck to the game plan and the Tigers put together a 75-yard drive that ended with redshirt senior quarterback Connor Frazier scoring a touchdown off of a quarterback sneak, which brought the team within a touchdown and two-point conversion.

Junior running back Darius Victor helped propel the drive with 51 yards off of five carries. Victor finished the game with 137 rushing yards and averaged 4.9 yards per carry.

Towson’s defense had to make a stop with less than eight minutes left in the game, which almost happened when senior cornerback Donnell Lewis stripped the ball from ECU’S wide receiver Davon Grayson and Towson recovered it.

However, the official review showed that Grayson’s knee was down before the ball came out.

The Tigers’ defense was still able to force a three-and-out though, and the offense had one more chance to tie the game against the Pirates.

Victor received four straight carries after Valley’s catch and got the ball to the 15-yard line.

On third-and-6, the Tigers tried a draw play with sophomore running back Marquel Dickerson, but he was stuffed short of the line of scrimmage, which brought the Tigers down to their final chance with two minutes left in the game.

Frazier went into shotgun formation on the last play and attempted a pass to redshirt freshman Sam Gallahan on a slant pattern.

However, ECU’S defensive back Terrell Richardson hit Gallahan as soon as he tried making a clean catch, which knocked the ball loose.

Towson turned the ball over on downs and ECU was able to run out the clock to end the game.

Despite the loss, Frazier threw for a career-high 221 yards.

He also rushed for 43 yards, threw a touchdown and ran for a touchdown.

Frazier went into the season battling redshirt freshman quarterback Ellis Knudson for the starting job, but Ambrose went with the redshirt senior.

“You got to see what five years learning in the same system and growing up can do,” Ambrose said according to Towsontigers.com. “That is probably the best he has played in a big game in probably his entire life. He did it in a very casual and calm way and I am very pleased with his effort today.”

Towson was the underdog going against ECU and Ambrose praised his team for its fight.

‘You play a perennial bowl team in one of the hardest places to play in America, and you stick with them and have a chance to win the game in the fourth quarter,” he said according to Towsontigers.com. “That says a lot about what these kids can do. Now we just have to build on what we did here, get over the loss, and keep moving forward.”

Towson will look for its first win of the season in a home matchup against the Saint Francis Red Flash (1-0). Kickoff is at 6 p.m. on Saturday.