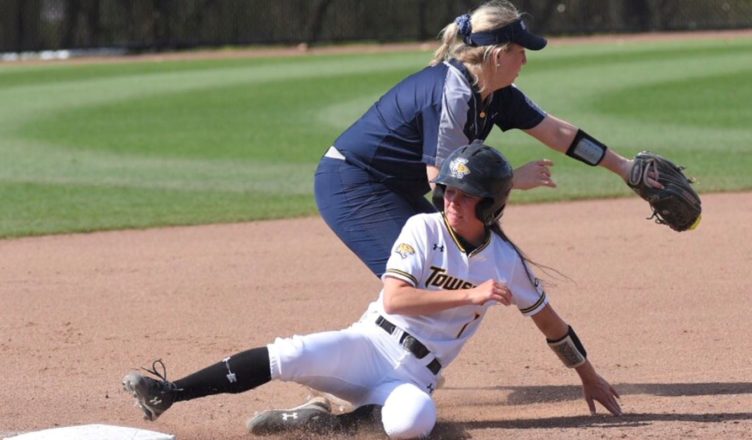 Looking to win their final road trip of the season, the Tigers headed to Elon for a weekend series against the Phoenix (29-18-1, 11-7 CAA). After a shutout loss in game one, Towson (24-25, 7-11 CAA) bounced back in game two to even the series before falling on Sunday.

“I was disappointed in how we played in game one but was proud of how we fought back in game two,” said Head Coach Lisa Costello. “In game three, we didn’t play poorly, we weren’t able to capitalize. They’re a very good team and I’m glad we got one game out of the series.”

On Sunday, the Tigers looked for the series victory and gave up an RBI double in the second inning to take fall behind early. Elon’s sophomore third baseman Ally Repko hit the first of her two home runs of the game, this one coming in the third inning, to extend the Phoenix lead to 2-0.

Junior utility Jessica Swistock responded with a home run in the fifth, cutting the Phoenix lead to 2-1. Repko’s second home run matched her first as both went over the right field fence, increasing Elon’s lead to 3-1. Towson was retired in order the next two innings to end the game and were retired in order in four of the seven innings.

Costello said giving up three runs “shouldn’t have hurt us, we should’ve been able to score. If we hold a team to three runs, we should win the game.”

Redshirt junior pitcher Ashley Cruise started the game, but after walking three batters and throwing two wild pitches, was taken out before recording a single out. Sophomore pitcher Melissa Abrahamian (6-7) took the loss, pitching four innings and allowing four hits and two runs without a strikeout.

“We really struggled with their pitcher and weren’t able to make adjustments,” Costello said.

Towson tried to even the series in game two and fell behind in the second inning as Elon hit a home run. The Tigers scored their first run of the series the next inning to tie the game before the Phoenix responded in the bottom of the inning to retake the lead, 2-1.

In the next three innings, Towson did not record a hit and had three runners on base after walks. In the seventh inning, a triple by freshman third baseman Chloe Poulich brought home three runners to take the lead, 4-2. Elon hit a double to lead off the bottom of the seventh, however were retired in order to end the game.

Costello said of Poulich’s triple that “she did a good job of getting on base and didn’t try to do too much.”

“[Abrahamian] was hitting her spots, she kept the ball down and her changeup was working,” Costello said. “We have a lot of respect for what Elon can do offensively.”

Freshman pitcher Sara Johnson (6-5) took the loss, allowing seven hits and six earned runs while striking out three batters in 3 1/3 innings of pitching. Towson had two errors, and both lead to scores by the Phoenix.

“Elon is a very good hitting team, [Johnson] was trying to be too good and tried to be perfect when she doesn’t need to be,” Costello said. “I think it was out of respect for what they can do offensively.”

The Tigers wrap up the regular season at home against Drexel this weekend in a three-game series. Game one from the Tiger Softball Stadium is Friday, May 3 at noon. Currently in a three-way tie for the last tournament spot in the Colonial Athletic Association standings, Towson could punch their ticket with a series victory.

“I want to see the team compete and not make it any bigger than it is,” Costello said. “I want to try and win the first inning and take it from there.”