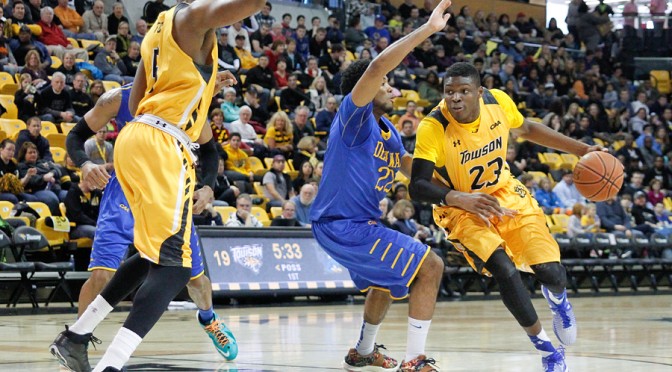 In their final game before the Colonial Athletic Association tournament on March 6, the Tigers were hoping to spoil the Delaware Blue Hens’ chances of having a first-round bye in the tournament, the same tournament Delaware won last year to advance to the NCAA tournament.

It was the second game in a row that the Tigers failed to score more than 60 points in a game, and the sixth time in their past eight games that they scored 62 or fewer points.

The Tigers got out to an early 17-10 lead after sophomore forward John Davis scored four points in the first eight minutes of the game.

However, Towson went on to miss eight shots in a row, and Delaware was eventually able to fight back to take a 24-23 lead with 3:24 remaining in the first half.

Sophomore center Walter Foster did most of the offensive damage for the Tigers in the first half, making all six of his field goals for 12 points. Davis once again was dominant on the boards, grabbing six rebounds in the first half.

Coming into the game, Davis was tied for 32nd in the country with 11 double-doubles on the season.

Poor three-point shooting held the Tigers back from holding on to any leads in the first half. As a team, they shot 1-for-6 in the first from beyond the arc, and freshman guard Byron Hawkins was 1-for-4 from three.

Meanwhile, Delaware made two threes in the final 4:11 of the half to extend their lead to 31-27, before Hawkins made his three with seven seconds left on the clock to cut the Blue Hens’ lead to just one heading into the locker room.

Towson came out strong in the second half, as Hawkins, junior forward Timajh Parker-Rivera and freshman forward Mike Morsell all scored in the first 3.5 minutes of the half to take a 37-33 lead.

Again, the offense sputtered, and the Tigers didn’t make a basket for the next three minutes of game time, allowing Delaware to retake the lead once again.

Junior guard Four McGlynn didn’t score his first points until there was just over seven minutes left in the game, but his three gave the Tigers back the lead, making the game 50-47. After McGlynn saw a decrease in playing time toward the middle of the season, he came on strong in the final four games of the season, scoring in the double-digits in all of them. However, he was held to just 19 minutes against Delaware and was shutout for the majority of the game.

The Tigers scored 10 more points in the final 7:36 of the game, while Delaware freshman guard Kory Holden, a frontrunner for the CAA Rookie of the Year award, scored nine points of his own during that span.

The Tigers had several chances to tie the game up at the end, but Morsell, Foster, Davis and McGlynn all missed shots in the final 3:16, allowing the Blue Hens to ice the game with free throws.

Towson finishes the season ranked 269th in the country in scoring offense during the regular season. The Tigers will now face Elon in the first round of the CAA tournament on Friday. If they win that matchup, they will move on to face the No. 1 seed in the tournament, which will be either UNC Wilmington or William & Mary.