Throughout her youth, Beth Kennedy always loved to play ice hockey, but when she arrived at Towson University three and a half years ago, there wasn’t a team for her to play on.

“My friends encouraged me to try to create a team,” Kennedy said. “So I learned how sports clubs worked and posted fliers around campus and there was enough interest to start the team.”

Kennedy, now a senior at Towson, is founder and club president of the women’s ice hockey team and has worked tirelessly to build and lead the program to its third straight Delaware Valley Collegiate Hockey Conference (DVCHC) Championship.

In 2014, Towson won its first DVCHC Championship with a 10-3 victory over Virginia despite finishing the regular season with a 7-4 record.

Winning its first championship was something that Towson didn’t expect to accomplish, especially with a team that consisted of just 10 players.

“Starting a dynasty after our first championship was the furthest thing from our minds,” Kennedy said. “The five or so girls that started the team just wanted to play. We were just trying to get through the year and build from there.”

The following year, Towson capped off a perfect 15-0 season and won its second straight DVCHC Championship with a 3-2 win against Navy.

After expanding its roster from 10 to 13 players and outscoring opponents by an average of 9.5 goals per-game in the regular season, hoisting the championship trophy was something that Towson expected to accomplish that year.

“When I look back on that second championship we were perfect,” said senior center Brooke Edwards. “There is a league sportsmanship rule that you can only score so many goals and every single game we scored the max amount of goals and we didn’t let in hardly any.”

Winning the title against Maryland made the victory even sweeter for the team who fell to the Terrapins 4-1 on senior night on home ice.

Junior goaltender Lauren Wood didn’t play in the senior night loss to Maryland. She was recovering from a torn MCL—a ligament that gives stability to the knee.

In the DVCHC Championship Game, however, Wood played through the injury and recorded the game-winning save in the shootout.

“My MCL was on fire,” Wood said. “But I knew if I could come up with a stop it would be over. I remember the girl from Maryland coming down the ice and the sound of the puck just hitting my stick. After that all I remember is throwing off my mask and my teammates mobbing me in the crease.”

It hasn’t been easy for Kennedy to build and lead the Towson program to three consecutive DVCHC Championships.

Kennedy has had to balance the team’s scheduling, budgeting and traveling while managing her business administration degree and social life.

In her time as club president, Kennedy’s biggest challenge has been managing the team’s finances.

“There is always a lot to do,” Kennedy said. “Since we are such an expensive sport and we are a majority self-funded team, girls will pay five to six hundred dollars in dues to cover expenses. It’s like running a small business, which is really good experience.”

With Kennedy graduating this spring, sophomore vice president Megan McNeill will be taking over as club president, a role that she is both excited and nervous for.

Towson is graduating six seniors, three of which play on the defensive side of the puck.

“Recruiting will be big because we are losing half of our team,” McNeill said. “Not a lot of girls play ice hockey, but for those that do their biggest concern is the time commitment. Our biggest time of the season is in the fall so they would be diving right into hockey when they come to Towson.”

Although Towson will be losing a majority of its team, returning members are prepared to make sacrifices to capture another DVCHC Championship.

“If we get a girl that can play goalie and our defense is struggling I will put on pads and play defense if I have to,” Wood said. “All year our moto has been, ‘FTT, for the team,’ and I am prepared to carry that into next year too.”

For those graduating, the bonds and memories created on the team will be shown from more than just their injuries and scars received on the ice.

After capturing its third straight DVCHC Championship the women  got matching tattoos with the team motto, FTT, for the team.

“I feel like [coming to Towson] all happened for a reason,” Edwards said. “The girls on this team are my best friends now and it just all fell together.”

Leaving the program that she worked so hard to build and lead to three straight DVCHC Championships won’t be easy for Kennedy either, but she knows that she will always have a place on the team.

“Coming into college I didn’t think I was going to play hockey again,” Kennedy said. “But, now that I was able to it was just an amazing memory because I got to come back and play a sport that I loved and I will always be just a phone call away.” 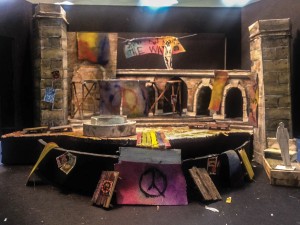