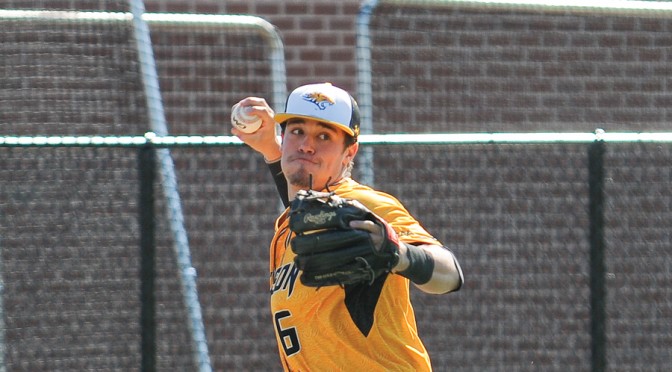 The Tigers fell to the University of Southern California Trojans by a score of 8-6 in Los Angeles on Sunday, finalizing a three-game sweep in the opening weekend of the 2015 season.

The game was the last piece in a series in which Towson was outscored 35-7. However, Head Coach Mike Gottlieb said he felt it was a necessary step in the team’s development.

“I like to play good teams early on,” Gottlieb said. “Some of the new guys, both the freshmen and junior college transfers got a chance to play and I got to see what they are capable of doing.”

Towson (0-3) started the day swinging as sophomore second baseman Brady Policelli got a one-out single in the top of the first inning. He moved to second base on a wild pitch before senior shortstop Peter Bowles laced a single to USC right fielder Bobby Stahel. Policelli rounded third base and headed home, but could not reach the plate in time as Stahel’s throw beat him, and catcher Jeremy Martinez applied the tag to keep the game scoreless.

However, the Tigers did open the scoring on the day an inning later with a two-run home run off the bat of junior first baseman Spencer Sutton. The long drive over the right field fence at Dedeaux Field scored freshman third baseman Chris Ruszin.

The Trojans (3-0) quickly struck back in the bottom of the inning. Second baseman Dante Flores reached base on a dropped third strike, and two batters later, infielder Angelo La Bruna singled to score Flores and make it a 2-1 game.

In the top of the third inning, the visiting Tigers added to their lead with another long ball. This time, it came from Policelli. It was a solo shot that just squeaked over the fence in right field.

Bowles followed with another long fly ball to right field. This one stayed in the yard, but was bobbled and dropped by Stahel. Senior designated hitter Brendan Butler and freshman right fielder Colin Gimblet each worked walks to load the bases for sophomore catcher Billy Plante, who sent a sacrifice fly to centerfield, which scored Bowles from third to make it a 4-1 lead for Towson.

Walks were a theme for the Tigers as they managed to work nine bases on balls Sunday while only striking out six times after struggling with the bats on Friday and Saturday.

“We are always talking about being patient at the plate,” Gottlieb said. “We lost Saturday and Friday to very good pitchers. It would be tough to beat those guys in May, let alone the first weekend of the season. On Sunday, we saw some guys that are more like the pitchers in the [Colonial Athletic Conference] and I thought we did some things well.”

The Tigers lost the lead when the Trojans used three hits, two errors, three walks, six stolen bases and a balk to score five runs, and their first lead of the game in the bottom of the fourth inning. The offensive barrage saw 11 Trojans come to the plate and Tigers’ starting pitcher Lee Lawler removed after three-plus innings of work.

In the sixth inning, Plante led off with a single and Ruszin followed with a walk. A Sutton ground out to third base moved the runners up ahead of freshman left-fielder Mark Grunberg. During Grunberg’s at-bat a wild pitch scored Plante from third and moved Ruszin from second to third. A few pitches later, Grunberg singled to score Ruszin and tie the game at six runs apiece

But the errors came back to haunt Towson again in the bottom of the frame. USC left fielder Garrett Stubbs delivered a one-out single to get things going. A few pitches later, Towson’s junior pitcher Austin Clark made a wayward pick-off attempt that sailed past Sutton covering at first base. The ball trickled down the wall in foul territory far enough to allow Stubbs to make it all the way to third base, where he would come in to score on a Martinez sacrifice fly to center field and give his team a 7-6 lead.

Two innings later, the Trojans put a cap on the day by scoring their eighth run. Clark (1-0) was stuck with the loss for the Tigers with Marc Huberman (1-0) earning the win and Kyle Davis the save (1) for the home team Trojans.

It was a mixed bag of performance for Towson on Sunday. The offense showed improved discipline, however, the defense flubbed five errors on the day and 13 across all three days in California.

“We didn’t play good defense,” Gottlieb said. “That’s the biggest thing for me. Part of the reason is because it’s the first weekend of the season, and we haven’t been outside much. But I am worried that this may be an issue for us all season long too.”

On top of that, the Trojans were 11-for-11 on stolen base attempts Sunday afternoon. They had stolen just two bases in the series leading up to that.

“It was a combination of both [the catchers and the pitchers]” Gottlieb said. “A lot of these kids come out of high school and they have high leg kicks and they don’t have to worry about holding runners because they pitch so well that there aren’t usually runners on.”

It is an issue that Gottlieb said he and his coaching staff have preached about in the months leading up to the season.

“This hits home for me,” Gottlieb said. “We have talked about it and maybe it will make something click and make some of these guys think ‘This is what he has been saying.’”

The Tigers will not be back in action until Feb. 25, when they host the UMBC Retrievers at the John B. Schuerholz Park for the home opener. First pitch is scheduled for 2:30 p.m. 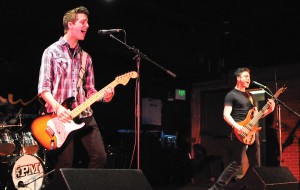 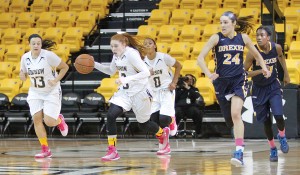