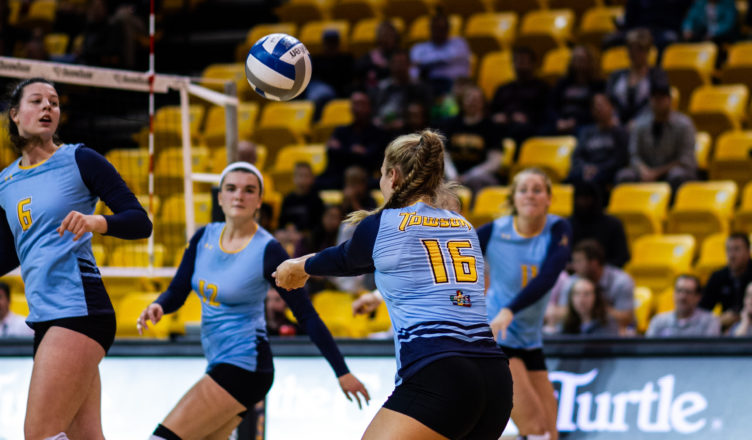 The Tigers won their tenth straight conference match after defeating the Hofstra Pride 3-1.

“The target on our back gets bigger with each win we secure so every team is gonna bring their best against us,” Senior outside hitter Annie Ertz said. “That’s why it is so important that we focus on the little things that got us to this point and continue to treat every opponent the same.”

The Tigers trailed by six points to begin the first set. Hofstra used five kills and two Towson errors to maintain the momentum throughout the set. For most of the set the Tigers did not score consecutive points, while the Pride scored four straight to lead 16-6.

Towson came back scoring six of the next eight points, and later trailed by as few as two points. Senior outside hitter Olivia Finckel contributed three kills and sophomore outside hitter Emily Jarome had two kills during the run. Despite the Tigers attempt at a comeback, Hofstra used a 4-2 run to win the set 25-21. This was the first time in four games Towson had lost the first set.

“After we lose a set, we will take a minute to regroup and refer back to the game plan,” Ertz said. “We remind ourselves of the keys to the game and how we can find success.”

In the second set, the Tigers used three consecutive aces from junior defensive specialist Camryn Allen to take an early 4-1 lead. The Pride responded and tied the set at 10-10, however, Towson scored six of the next seven points. Four points came off kills, with senior middle blocker Silvia Grassini contributing two.

Hofstra came back to cut their deficit to 17-16, and the Tigers scored three consecutive points to increase their lead to four. Freshman middle blocker Lydia Wiers contributed three late kills and the Tigers won the set 25-23.

The third set began with errors from both teams, and after trailing the Pride used a 5-2 run to tie the set at 7-7. Towson went on a 9-2 run including three kills from Jarome to take a 16-9 lead. The remainder of the set was competitive as the Tigers outscored the Pride 9-8 using five Hofstra errors to win the set 25-17.

The fourth set was a battle for both teams. Hofstra and Towson were tied for most of the set and it took a late Tigers run to win it.

Each team made multiple runs scoring three consecutive points, but neither led by more than two points. After a service error by Ertz gave the Pride a 20-19 lead, the Tigers scored six of the last seven points off of five kills to win the set 25-21. Wiers scored three of the last six points off kills.

This game gave the Tigers a 14-game winning streak and continued their undefeated start in conference play.

“The target on our back gets bigger with each win we secure so every team is gonna bring their best against us,’’ Ertz said. “That’s why it is so important that we focus on the little things that got us to this point and continue to treat every opponent the same.”

After a canceled match against Coppin State, Towson traveled to Boston, Massachusetts and defeated the Northeastern Huskies 3-0.

The Tigers were ready to get back on the road after their two wins at SECU arena. Northeastern (11-11, 5-5 CAA) had won three of their previous four games.

The first set started off slow for the Tigers. Northeastern had made three consecutive kills which gave them a 3-0 lead. Jarome responded with a kill, but the Huskies went on a 5-2 run to increase their lead to 8-3.

Towson came back and scored five unanswered to take the lead 12-11. The Tigers took advantage of three Northeastern errors, and the set would remain competitive with Towson holding a 22-16 lead. The Huskies went on a 6-2 run and tied the set at 23-23. The Tigers regained the lead using a 5-3 run to win the set 28-26.

The second set began with two early kills from Ertz as Towson took a 3-0 lead. Northeastern cut the lead to three but the Tigers used a 6-1 run to increase their lead to 15-7. The Huskies responded and scored 11 of the next 13 points to pull to within one.

The Tigers took advantage of six kills by Wiers in the set to win 25-19. Wiers made a total of 13 kills in this game and four successful blocks.

As the away team, opposing arenas can be intimidating, however, for Ertz she enjoyed the atmosphere each arena presented.

“Both of the teams we played last weekend had pep bands and although it was loud, it made for a fun and lively environment.”

Towson led for the entire third set, leading by as much as eight points. The Tigers scored the first three points including two off Ertz kills. The closest Northeastern got was three points, but with a 11-7 score, Towson went on a 7-2 run. This increased the Tigers lead to 17-9, however, the Huskies responded.

Northeastern used a 9-2 run to decrease their deficit to one point, 19-18. Towson used three kills from Wiers and scored six of the last seven points to win the set 25-19.

One of the keys to the set was the difference in errors, the Huskies had nine errors in the set compared to the Tigers five.

Towson has six games left in the regular season, and despite postseason aspirations are preparing one game at a time.

The Tigers return home this weekend to face James Madison at SECU arena on Friday, Nov. 1 at 7 p.m. and Delaware on Sunday, Nov. 3 at 1 p.m.