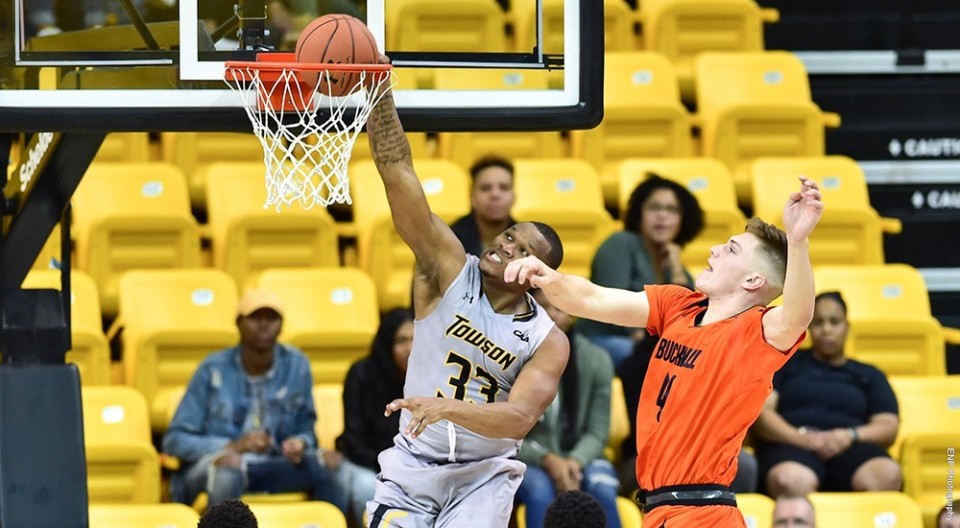 “That’s going to be about as tough as it gets,” Head Coach Pat Skerry said. “We’ve always been a day-to-day type of team. We have goals, but our guys know it’s a process and it’s what we do on a daily basis that’s going to give us a chance.”

The Tigers are coming off a successful 2016-2017 season in which they won 20 games and advanced to the Colonial Athletic Association (CAA) semifinals before being bounced by the College of Charleston.

Towson has to make do this season after losing two of its top-three scorers in John David and William Adala Moto. The team looks for returning players like senior guards Mike Morsell, and Deshaun Morman to step up and produce on both ends.

Morsell and Morman were named to the preseason All-CAA team. Morsell was selected to the second team, while Morman received an honorable mention recognition. Last season, Morsell led Towson in scoring with 13.4 points per game average, while Morman led the team with 49 steals.

“We lost two good players,” Skerry said. “We lost two good physical rebounders, but we’ve got nine guys back that play a lot so I think for us can we continue to guard and rebound at a level that has allowed us to be pretty good.”

The Tigers have also altered their style of play offensively in order to boost scoring. Last season, Towson shot less than 200 three-pointers than its opponents over the course of the year. Skerry moved senior Eddie Keith II from his natural guard position to the forward spot in order to space the floor and open up the offense.

Keith’s transition demonstrates something Towson has practiced the entire offseason: sacrifice. Skerry has preached to the team that it is not about guys getting their numbers, but about different players contributing each game.

“We’ve got guys back who have improved, but just because you’ve improved doesn’t necessarily guarantee that you’re going to [produce] more,” Skerry said. “It’s going to be different guys on different nights.”

The Tigers need a strong team effort when they face junior guard Ahmad Caver and the Monarchs. Caver was named to the All Conference USA Preseason Team following a season in which he averaged 13 points per game.

Caver had one of the best assist to turnover ratios in Conference USA last year and showed ability on defense as he recorded a team-high 41 steals. Towson will look to control the pace of the game and prevent turnovers in order to limit Caver’s effectiveness.

Though Skerry has emphasized the three-point shot in the offseason, look for the Tigers to attack the rim in order to cause foul trouble and take the crowd out of the game early.

“The most efficient way to score is at the rim, and the second most way is at the foul line,” Skerry said. “While we expect to shoot more and make more threes, we don’t want to lose sight of the fact that we have to get at the glass and foul line because that’s a big part of our success.”

Following their first game, the Tigers come to SECU Arena for their home opener Monday, Nov. 13, against Frostburg State University.

“I’m hopeful that when we get to our first home game, there’ll be lots of people there,” Skerry said. “It’ll be important for us to get that place going so it can be a tough environment.”