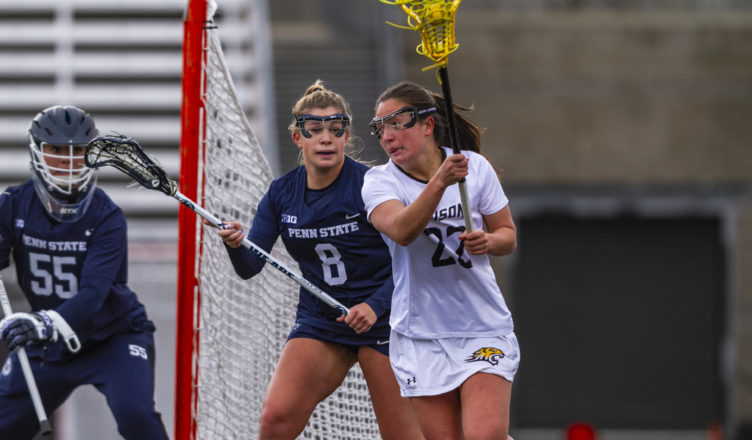 Ending a three-game losing streak to start the season, the Tigers earned their first victory of 2020. Towson (1-3) defeated High Point 12-11, taking advantage of a 6-0 run in the second half.

“It was a great battle out there today,” head coach Sonia LaMonica said. “I think the outcome of this game is a reflection of the hard work, raising of the standards, accountability from this past week of practice. The intensity that this team brought out in practice, I felt really translated on the field. High Point really gave us a tough battle right to the final whistle and obviously, it’s a great win for this group and a great confidence builder.”

Freshman midfielder Blair Pearre scored three goals for the Tigers and her goal with 2:08 in the first half gave Towson its first lead of the game.

“I think we came out a little frazzled to begin with and then after they scored two goals in a row, we called a time-out and we got back together,” Pearre said. “We just came back out and worked together as a team and stepped it up. But we give High Point credit for that. They came out really strong.”

High Point came back in the second half with three unanswered goals, but the Tigers responded with a 6-0 run including two goals from Pearre. She has recorded a hat trick in three consecutive games for Towson.

“I’ve just been coming out super hard in practice everyday trying to drill as hard as I can,” Pearre said. “100% every single day. Coming out early and working on my shooting, working on my game I think has really helped me this year.”

Thornton’s second goal gave the Tigers an 11-7 lead with 12:12 remaining. The Panthers then scored two back-to-back goals, but Stack responded with her third goal of the game.

“I take pride in my shooting,” Stack said. “I work on it every day. Blair and I go out early, we stay after, we work on our shooting — I think that’s such an important factor. Confidence has been huge for me and that’s the biggest thing that I’ve gotten to this season that’s made me more successful than in past years.”

High Point scored two late goals, but Towson held on for their first victory of the season.

“They were playing poised and being patient, but also aggressive,” LaMonica said. “High Point was being aggressive in coming out and pressuring. I think our group did a really good job in avoiding that pressure, staying big, keeping the ball moving, and staying really composed and calculated in what they were doing and that translated into some really nice goals.”

The Tigers travel to Stony Brook to face the Seawolves on Thursday, March 5 at 5 p.m.

“There are certainly things that we’ve got to build on off of today,” LaMonica said. “Some positives that we will take away and that’s really important too to build on our confidence, but both ends of the field just things that we can continue to learn from and use that momentum and then continue to bring that high level of intensity in practice in these next few days.”