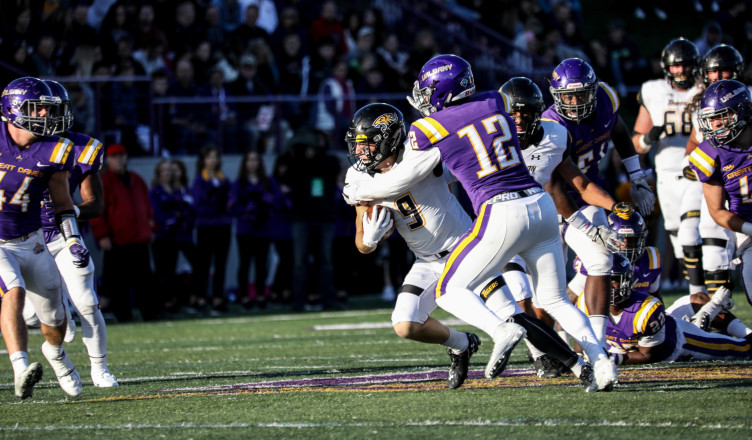 Towson extended its winning streak to five with a 56-28 victory over Albany Saturday afternoon at Bob Ford Field.

Despite the convincing win, Head Coach Rob Ambrose described the game as anything but a cakewalk.

“They’re a talented football team,” Ambrose said. “They have some gamebreakers on offense and play very strong at home.”

After a punt by each team to begin the game the Tigers marched down the field and redshirt junior running back Shane Simpson finished the drive with a three yard touchdown. He has scored in each game for the Tigers this season. The Tigers forced a three and out on the ensuing drive, and redshirt senior punter Pat Toomey kicked a 27-yard field goal after junior kicker Aiden O’Neill left the game.

Towson led 10-0 at the end of the first quarter just like last week against William and Mary. In the second quarter, redshirt junior quarterback Tom Flacco, continued his impressive season leading a 13-play scoring drive over six minutes. He finished off the drive with a five-yard rushing touchdown.

Albany could not respond, punting twice. Junior running back Yeedee Thaenrat ran 42 yards for a score as Towson began to pull away. The Danes finally put together a drive going 84 yards and capped off by a one-yard run by Testaverde.

Towson took back the momentum however, as Flacco quickly put in two passing touchdowns.

Sophomore wide receiver Jabari Allen caught a 17-yard score, and redshirt junior wide receiver Shane Leatherbury caught a 41-yard pass for a score. Just before the half ended, Green caught his second touchdown of the game on a 50-yard completion to end the half. The Tigers took a 38-21 lead into halftime

In the second half, Albany failed to get anything going on offense, going scoreless in the third quarter.

The Great Danes had three possessions in the quarter all resulting in punts. After a 47 yard drive by the Tigers, O’Neill hit a 45-yard field goal to give the Tigers a sizeable 20 point lead.

Flacco continued to be effective on the ground, rushing for 80 yards on 14 carries including a 33 yard run.

He ran in for his second rushing touchdown of the game, and redshirt senior tight end Zach Heron ran in for a two point conversion.

Albany’s first drive in the fourth quarter went 42 yards, but ended in a turnover as sophomore defensive back Vashon McCants Jr. recorded an interception to seal the win and extend Towson’s winning streak to five.

The win was a total team effort as Leatherbury led the team in receiving with seven catches for 114 yards and a touchdown, sophomore defensive back Mantriel Reeves led the defense with eight tackles and 23 different defenders made at least one tackle.

“I’m proud of my guys for coming this far and getting a win,” Ambrose said. “Coach Gattuso has some really dynamic players on that team and does a great job.  We are 6-1, and 3-0 in October, we have not seen that in a long time.  It is a good place to be.”

Flacco finished with 306 passing yards and two scores, but he did throw two interceptions. He led the Tigers in rushing, averaging nearly six yards a carry. Flacco’s impact on the team has been clear as Simpson emphasized.

“It’s definitely different,” Simpson said. “He’s so dynamic. He can throw, but he can also run so you don’t know what he’s going to do.”

Next, the Tigers head to Delaware to face the Blue Hens next Saturday, October 27. Kickoff from Newark is at 3:30 p.m.