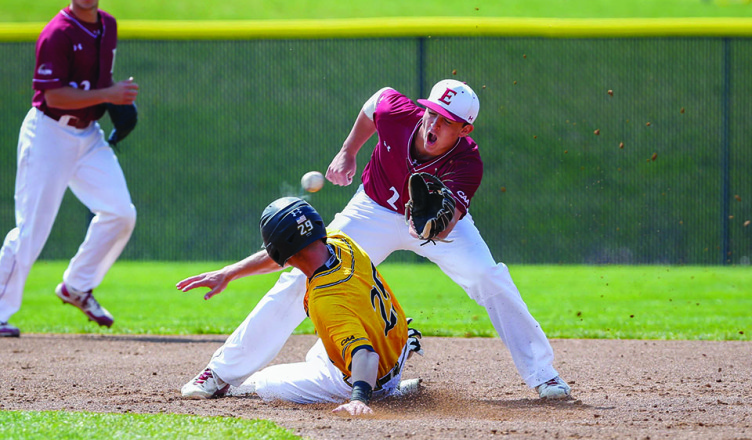 In Sunday’s series finale, Elon jumped out to an early 3-0 lead in the first inning and never looked back. In the second inning, redshirt senior outfielder AJ Gallo scored Towson’s lone run when junior infielder Logan Burke doubled to the right field corner.

Elon outhit Towson 19-6 and went on to clinch the series victory with an 8-1 win.

Michael Adams (2-4) suffered the loss after giving  up five earned runs on 11 hits through five innings of work.

“It could’ve been a winning weekend,” Head Coach Mike Gottlieb said. “It kind of slipped out of our hands.”

In Saturday’s game, Elon took an early 1-0 lead. However, Towson got on the board in the third inning when sophomore infielder Richie Palacios scored on redshirt junior outfielder Colin Gimblet’s RBI single.

In the seventh inning, the Tigers took a 4-2 lead when Palacios and sophomore infielder Richard Miller scored on a throwing error.

However, the Phoenix took a one-run lead in the top of the ninth inning. The Tigers tried to rally in the bottom of the ninth but fell 5-4.

Junior pitcher David Marriggi (4-2) took the loss after allowing two runs on two hits in one inning of work.

In Friday’s series opener, Towson quickly fell behind Elon 8-0 but came back late in the game to earn an 11-10 victory.

In the bottom of the seventh, freshman outfielder Andrew Cassard doubled down the right field line to score redshirt senior infielder Colin Dyer.

In the top of the eighth inning, Gallo scored on a RBI single by Cassard. Later, junior infielder Billy Lennox delivered a two-run single to pull the Tigers within two runs of the Phoenix.

In the bottom of the ninth, Gimblet led off the inning with a solo home run. Later, Dyer doubled into the gap to score Sanford.

Dyer eventually moved up to third base and scored the winning run on a passed ball to give Towson an 11-10 victory.

Marriggi (4-1) picked up the win. He allowed one hit through one inning of work.

“We’ve done a better job at hitting in all fields,” Gottlieb said. “The hitting has been significantly better.”

Towson will play a pair of midweek games against Maryland Eastern Shore and George Washington before traveling to College of Charleston for a three-game series this weekend.