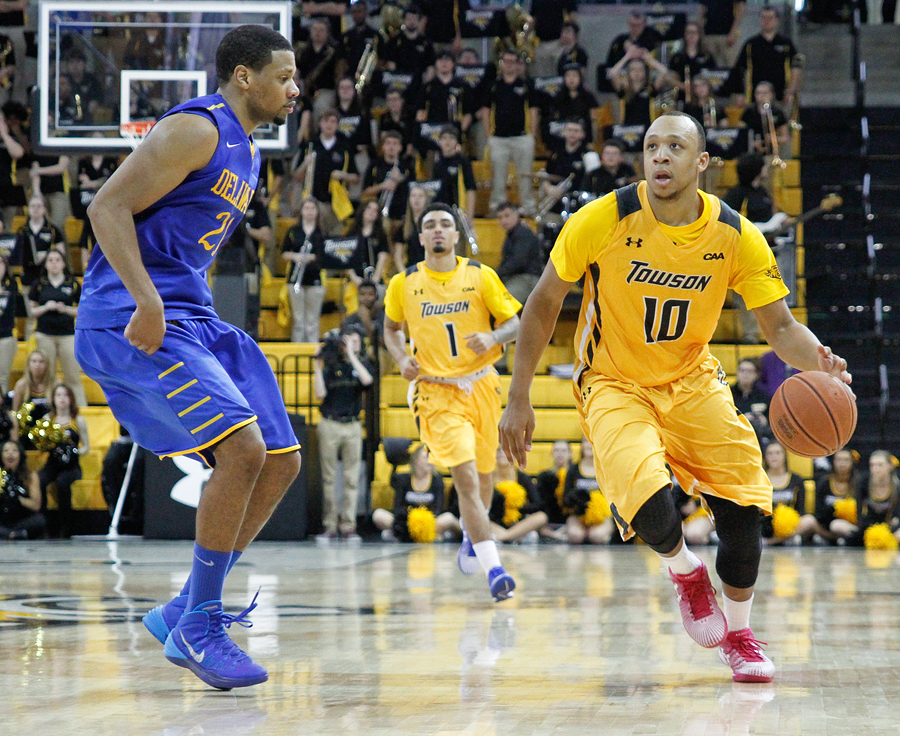 Last season, the Tigers were largely considered one of the favorites to win the Colonial Athletic Association basketball tournament, with a chance to advance to the NCAA tournament.

Towson was the No. 2 seed, and was eventually defeated by No. 3 William & Mary after winning its first-round game against James Madison.

2015 is a whole new story for Towson, who enters this weekend’s CAA tournament as the No. 9 seed, second-to-last in the conference.

Unlike last year, Head Coach Pat Skerry’s team will not have a bye in the first round, and they will take on the Elon Phoenix at 6 p.m. Friday, the first game of the tournament.

The Tigers have already beaten Elon twice this season, but by a combined six points between the two games.

Junior forward Timajh Parker-Rivera said the fact that the two teams have already faced off will make the game extra challenging.

“It’s tough to beat a team three times,” he said. “We beat them on a buzzer-beater when we beat them [at] home. They’re going to be ready, we’ll be ready. It’s going to be a good game.”

Towson comes in having lost four games in a row, but three of those losses were by five points or fewer.

The Tigers have scored 70 points in a game once since Jan. 31, and have scored 50 and 60 points, respectively, in their past two games.

Now that the team is farther back in the seeding, many would say that Towson is an underdog in the tournament and doesn’t have as much pressure to win as last season. However, Skerry said the team last year was similar because it was the group’s first chance to play in the CAA tournament after they were suspended from postseason play for a year due to test scores.

“The goal is to win it, but Friday is all that matters. If we can get past Friday, there won’t be any pressure and we’ll have a lot of momentum, but Friday night will be a tough game. We’re trying to put, preparation wise, everything into getting past into Elon,” Skerry said.

If Towson wants to win Friday and advance to a game against No. 1 seed William & Mary on Saturday, it will have to get its offense going again.

It finished the regular season 271st in the country in scoring offense, scoring 63.4 points per game, while Elon is 280th in scoring defense, allowing opponents to score 70.6 points.

Junior guard Four McGlynn said the team has learned from its mistakes over the season, and he believes the team has a chance to win the tournament.

For the second year in a row, the tournament is being held in Baltimore at Royal Farms Arena, so Towson has somewhat of a home-court advantage.

“We had great turnouts last year,” Skerry said. “I think it’s a wide open race, there’s no prohibitive favorites. It’s my true definition of what March Madness is.”