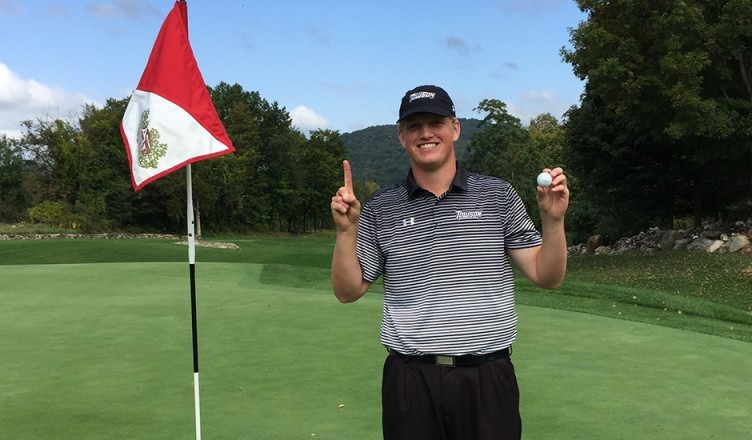 Junior William Bachelor hit Towson’s first hole-in-one in seven years as the team placed sixth out of 20 in the Hartford Hawk Invitational.

Bachelor selected his eight iron on the par-three, seventh hole, and sent a shot soaring towards the green. A loud ping rang out as the ball connected with the flagstick.

“I wasn’t sure if it went in or not, but we got up there and I checked the hole and it was in,” Bachelor said. “It was such a great feeling, pure joy. Great memory to share with my coach and the team.”

The Tigers showed improvement after finishing second to last in the Doc Gimmler Invitational.

“Now we can analyze and put a plan in place to help them each get to where they want to be on an individual level, and if we do that we’ll be exactly where we want to be as a team,” Head Coach Mike Larkin said. “The guys are extremely talented, and with some new habits that we’ll build going forward, they are going to start to get the results they expect of themselves.”

After just the first round of the tournament, the Tigers jumped to second on the team leaderboard.

“I loved watching the guys push forward with what we worked on all week and how that translated immediately to better results,” Larkin said. “They are starting to understand exactly what they need to focus on to get what they’re looking for out there, and that’s a fun process to watch unfold.”

Towson continued its success in the second and third rounds. For the second consecutive year, the Tigers finished sixth.

Freshman Kobdech Rodrat led the charge for the Tigers, posting a two-under for the tournament, and finishing twelfth overall.

Both Rodrat and sophomore Spencer Alexander placed in the top-20 for the tournament. This is Rodrat’s second consecutive tournament leading the team on the leaderboard.