“We needed to rebound,” Head Coach Sonia LaMonica said. “Delaware is always going to be a tough battle and they really challenged us, but I am pleased with how we stepped out and found a way to win and rebound after our last two loses.”

Later in the half, Santoleri scored her second goal of the game to give Delaware a 2-1 lead, but sophomore midfielder Kaitlyn Montalbano and freshman midfielder Natalie Sulmonte each scored a goal to give Towson a 3-2 lead to take into halftime.

Freshman goalkeeper Angie Benson finished the half with three saves for Towson.

In the second half, Delaware drew first blood and tied the game 3-3 on a goal from junior attacker Jamie Schwartz.

As the half progressed, the two teams battled back and forth for the lead.

Sulmonte scored her second goal of the game to give the Tigers a 4-3 lead at 24:28, but senior attacker Shannon Hawley responded to tie the game for the Blue Hens 4-4 less than four minutes later.

“[There are] still some things we got to build on,” LaMonica said. “But, overall, our clearing was cleaned up today from our prior games and our draws got better in the second half.”

With 5:06 remaining in the game, Delaware took a 6-5 lead on a goal from senior midfielder Kara Dattellas.

Minutes later, however, freshman attacker Carly Tellekamp scored her 15th goal of the season to tie the game 6-6.

“It was great to see her [Tellekamp],” LaMonica said. “She had been a little quiet. She was getting limited ball possession because they were shutting her off a little bit, but it was good to see her get on the scoreboard and get involved.”

With 15 seconds left to play in regulation, Delaware was able to hold the ball for the final shot of the game. However, the Tiger defense came up with a stop to force overtime. 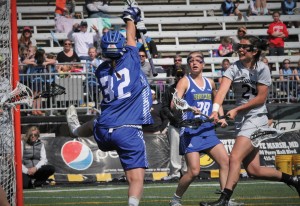 In the first half of the three minute sudden-victory overtime, both teams held each other scoreless.

However, in the second half of overtime, redshirt junior attacker Michelle Gildea ripped a shot past Blue Hens sophomore goalkeeper Taylor Carpentier to secure Towson the 7-6 sudden victory winner.

“It felt awesome,” Gildea said. “But it’s great that we were able to capitalize and just finish the game with a win.”

Towson will look to extend its winning streak to two games next Saturday against the Johns Hopkins Blue Jays at Homewood Field in Baltimore.