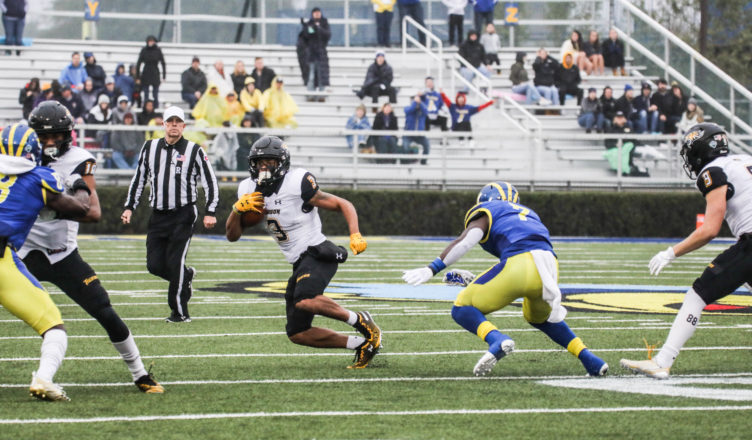 No. 22 Towson begins a crucial four-game stretch with its biggest rival, the Delaware Blue Hens. Both teams are coming off losses, as Delaware (4-4, 2-2 CAA) has dropped three of their last four games, while the Tigers (4-4, 1-3 CAA) have lost four of their last five contests.

Delaware is near the bottom of the Colonial Athletic Association (CAA) in total offense and defense. Despite their numbers, Tigers head coach Rob Ambrose isn’t expecting an easy day for the offense.

This year’s rivalry game has an added layer to it as Ambrose’s brother, Jared, is the offensive coordinator for the Blue Hens. Jared Ambrose was on Towson’s football staff from 2009-2018.

Although there is knowledge of his team’s offense on the other side, Rob Ambrose isn’t concerned with that heading into the game.

It happens all the time all across the country,” he said. “There’s football knowledge that people have all over. There’s knowledge on both staffs of both staffs philosophically

Redshirt freshman running back Will Knight is currently fifth in the conference with 547 yards. Delaware’s leading receiver is redshirt sophomore wide receiver Thyrick Pitts with 363 yards.

They do a lot on offense,” Ambrose said. “Have found a way to spread the ball, which makes them hard to defend.”

On defense, sophomore defensive back Kedrick Whitehead is third in the conference with 76 tackles. He is the only Blue Hens defender in the top ten of any major defensive statistics in the CAA.

The last time Towson faced Delaware was last season when the Blue Hens won 40-36. The Tigers failed to find the endzone late in the fourth quarter, despite three chances from inside the 20-yard line.

Despite last year’s loss, Towson has beaten Delaware in three of the last five games, dating back to 2014. The last two games of this rivalry have been decided by four points or fewer.

It’s going to be the next snap from here on out,” said Ambrose. “The goal is to get into November with a chance and hopefully you can play your best football in November and moving forward.

The Tigers are looking for their first conference win since Sept. 14 against Maine. With the calendar turning to November, these wins a crucial for making the FCS playoffs. However, Rob Ambrose wants his team focused on what’s in front of them.

“You gotta win the next play and stack them up as best as you can,” he said. “We’re building something for the rest of the season.”

Kickoff for this rivalry game is scheduled for 2 p.m. The game can be streamed on Flofootball.com and will be broadcasted on CBS Sports Radio 1300 with Spiro Morekas and Gordy Combs on the call.