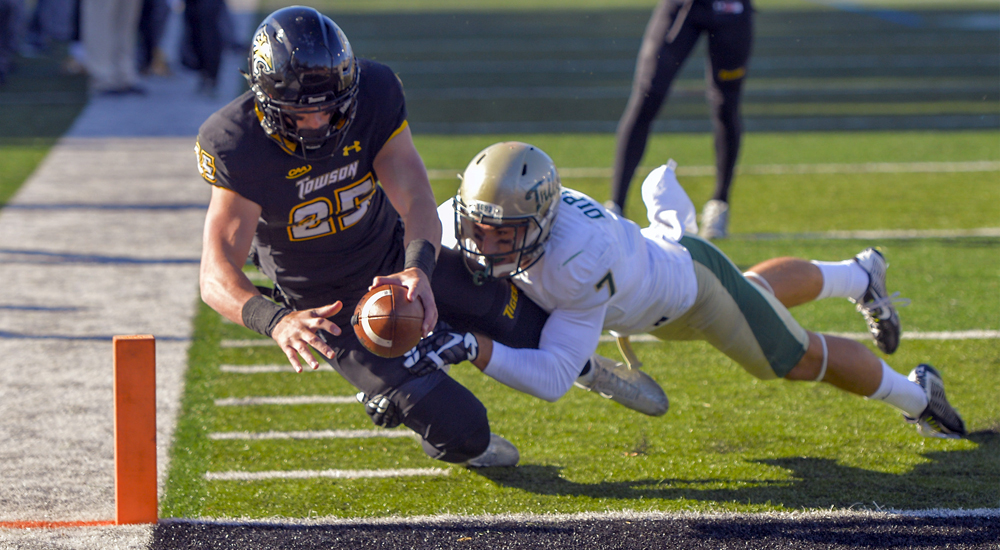 “I don’t think there is a better way to send out some seniors, especially considering the type of crazy season we have had,” Head Coach Rob Ambrose said. “For us to fight through all that kind of adversity and win this game against a team like William & Mary, it’s a great day to be a Tiger.”

In the first quarter, the Tribe (4-6, 2-5 CAA) took a 7-0 lead over the Tigers (3-7, 2-5 CAA). Tribe senior running back Kendall Anderson bounced a run to the outside and rushed past three Tiger defenders for a 14-yard touchdown.

Towson put three points on the board on its next drive to make it a 7-3 ballgame. The team drove into the William & Mary red zone on 13 plays but had to settle for a field goal after redshirt sophomore quarterback Morgan Mahalak overshot Simpson on the sidelines on third down.

The Tigers opened up the second quarter with the ball and took their first lead of the game thanks to a three-yard rush up the middle from redshirt sophomore running back Grayson Boyce.

On the ensuing kickoff, Towson elected to attempt an onside kick. However, William & Mary recovered the ball and took over on Towson’s 47 yard line.

The Tribe drove into the Tigers red zone and took a 14-10 lead when senior quarterback Steve Cluley scrambled to the outside, putting the ball over three Tiger defenders in the back of the end zone to sophomore wide receiver Jack Armstrong for a touchdown.

William & Mary extended its lead to 21-10 before the end of the first half, when Cluley found junior tight end Andrew Caskin wide open. Caskin made the catch and ran 16 yards into the endzone.

The Tigers opened up the second half with the ball and wasted no time scoring. Less than one minute in, Simpson carried the ball up the middle and cutback to the outside for a career-long 70-yard touchdown run.

William & Mary took a 24-17 lead on its next drive thanks to a 21-yard field goal from redshirt freshman kicker Kris Hooper.

The Tigers tied the game 24-24 on the ensuing kickoff. In an effort to keep the ball out of Simpson’s hands, Hooper squib kicked the ball up the middle of the field and into the hands of redshirt freshman defensive back Keon Paye. Paye scooped up the ball and took it 81 yards to the house.

“I just let my blocks develop and took my time,” Paye said. “Then I seen the crease and just hit it. It was exciting, but tiring.”

In the fourth quarter, Towson took a 31-24 lead on an 11-yard end around to senior wide receiver Christian Summers. The rush was Summers’ first career touchdown run.

“The defensive end just sat there,” Summers said. “I just caught the corner in and Dre had a great block on the outside.”

The Tigers extended their lead by 10 points with 6:40 left in the game when freshman kicker Aidan O’Neill put through his second field goal of the game.

William & Mary fought to get back in the game late in the fourth quarter, but Cluley threw an interception to redshirt sophomore defensive back Monty Fenner.

Fenner’s interception allowed the Tigers offense to milk more time off the clock and make it virtually impossible for the Tribe to complete the comeback.

The Tribe got the ball back once more before the game ended, but the Tigers defense made a stand to secure the victory and their second straight win.

“I said at halftime the best player on William & Mary’s team is us,” Ambrose said. “I said we had to decide whether or not we wanted to send the seniors out the right way. That’s all there was to it and there was enough guys in that locker room that got pissed off.”

Towson will conclude its 2016 campaign Saturday in Kingston, Rhode Island, against CAA rival Rhode Island. Kickoff is scheduled for noon.