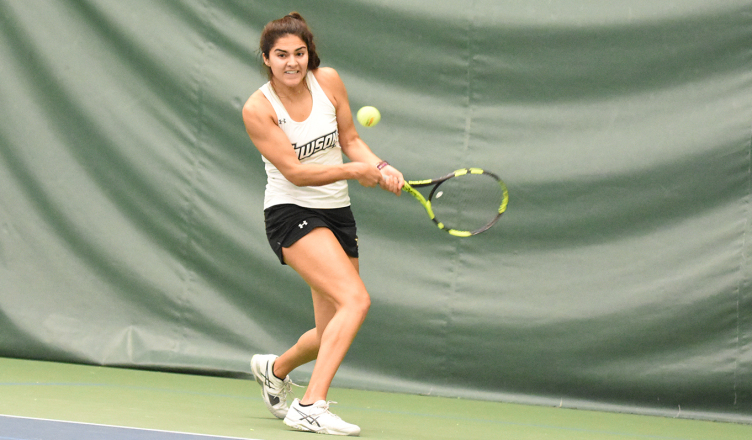 Towson completed its spring break campaign with four wins in five matches, giving the team its first winning record of the season this past week.

The Tigers earned three of their wins at the USTA National Campus in Lake Nona in Orlando, Florida, as they defeated Denison 7-0 Monday, Hofstra 6-1 Wednesday and Hamilton 7-0 Thursday. Their lone loss in Florida was a 5-1 defeat to Keiser Tuesday.

“We have the majority of the CAA matches in front of us,” Head Coach Jamie Peterson said. “We still can put ourselves in a better position to advance, which is going to be really important over the next few weeks.”

Sunday afternoon, Towson earned their third straight win with a 5-0 performance against Rhode Island at the Brigade Sports Complex in Annapolis, Maryland. The match was played in a condensed 4+1 format.

The Tigers took an early 1-0 lead by seizing the opening doubles match, as AJ Gomer and Renate van Oorschodt paired to defeat the team of Mihaela Codreanu and Nicole Legler 6-4, 6-2.

“I told the girls that it’s really important that we get off to a fast start,” Peterson said. “They did a really good job of that, for the most part, and were very efficient. We didn’t play our greatest, but we did everything necessary to be efficient.”

The Tigers went a perfect 3-0 in the doubles and 6-0 in the singles over the Continentals, with no Tiger dropping more than four games in any of the singles matches.

The Tigers swept the three doubles flights and won all six singles flights without dropping a set. The win marked Towson’s ninth consecutive victory over the Pride since the 2009-10 season.

“We had one singles loss, but we won some tough singles matches in straight sets,” Peterson said. “We really needed that win, and to win it in a convincing fashion, too.”

Tuesday morning, Towson fell 5-1 to No. 3 Keiser of the NAIA in Lake Nona.

The Seahawks only dropped five games overall between all three doubles flights and won four flights in singles to claim the win. Towson’s lone point was a 7-5, 7-6 (4) win at No. 5 singles by Gloninger over Emma Henriksen.

“They happened to play a bit better than us,” Peterson said. “The matchup level between the two teams was really even, but we didn’t adjust well enough to the conditions and got off to a slow start.”

Monday afternoon, Towson rolled past Division III opponent Denison 7-0 in Lake Nona, ending a three-match losing streak and giving the team its first win in just over a month.

The Tigers started with three wins in the doubles flights, before going on to take all six singles flights over the Big Red. The team won five of the six flights in straight sets, with the only dropped set coming in No. 6 Claire Bedi’s match against Charlotte Purnode. Bedi would come back to win 0-6, 6-4, [10-8] in the deciding set match tiebreaker.

“This is crunch time,” Peterson said. “It’s time for us to put up or shut up.”