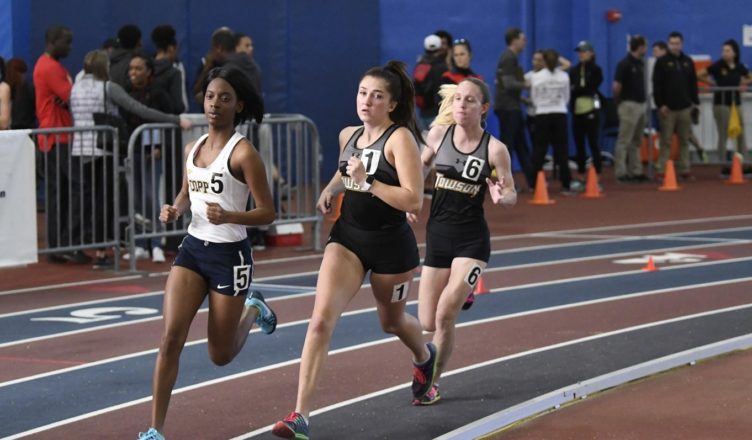 Towson’s indoor track and field team split to compete in the Penn State National on Friday and Saturday at University Park, Pennsylvania and the Navy Invitational Saturday at the Wesley A. Brown field house in Annapolis, Maryland.

The Navy Invite featured a personal record from sophomore Christina Riggins timing 7.80 seconds to place seventh in the 60-meter dash finals. Riggins timed 7.82 seconds in the preliminaries to qualify for the event’s finals.

Freshman Olivia Janke had a personal best performance in the mile placing second with a 5:01.06 time.

“She’s done an outstanding job these last two weeks that she’s competed,” Jackson said. “She enjoys the sport, appreciates and respects the opportunity that she gets and makes the most of it so she’s another freshman we’ll be talking about for the next few years.”

Splitting the team in half has a purpose, but can also pose a unique challenge.

“The challenge is just coaching,” Jackson said. “Not being able to be there with the rest of our team as well as some of our other coaches. It’s always great for us to be together at one place, but we need to split so that everyone on our team gets opportunities and also taking our student-athletes to the meets that they belong.”

“She’s extremely talented, very competitive, follows instructions well and she’ll be somebody we’ll be talking about for the next three years,” Jackson said.

Freshman Crystal Johnson set a personal record in the 200-meter dash with a time of 25.03 seconds.

The first day of the Penn State National featured Boghossian-James placing seventh in the pentathlon scoring 3,005 points for a performance which is seventh all-time.

“I believe it’s the first pentathlon of her lifetime so I’m very excited about how she started and looking forward to the future with her,” Jackson said.

Senior Naja McAdam won the first heat in the pentathlon and finished ninth with 2,221 points.

Johnson qualified for the semifinals in the 60-meter dash with a time of 7.60 seconds.

Junior Victoria Jones-Alleyne had a time of 8.79 seconds in the 60-meter hurdles and qualified for the semifinals.

Towson will be splitting teams the next time they compete as some members of the team will compete on Friday, Feb. 8 and Saturday, Feb. 9 in Nashville, Tenn. at the Music City Classic.

“It’s a big meet for us,” Jackson said. “We’re looking forward to competing there and I think it’s going to be a great experience for our student-athletes so we can’t wait to get out there.

Other members of the team will compete at the Navy Select on Friday, Feb. 8.