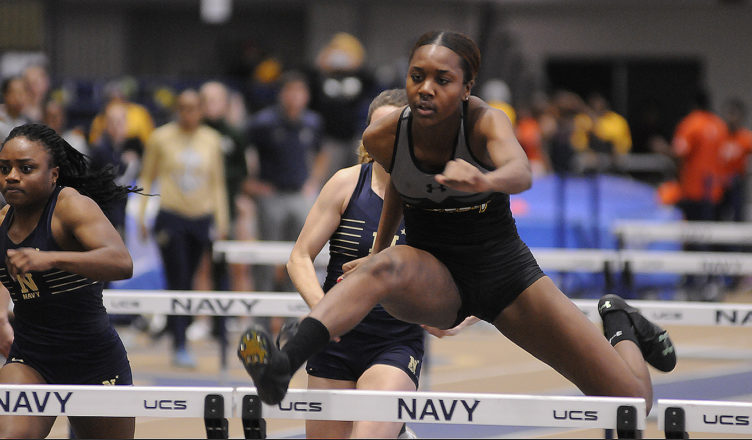 The indoor track and field team set school records and had solid performances at the Virginia Tech Invitational between Friday, Jan. 11 and Saturday, Jan. 12 in Blacksburg, Virginia.

“She’s just very talented,” said Head Coach Mike Jackson. “She’s been strong, very athletic, very gifted and so she’s got a lot to learn which is a good thing so we’re just trying to help her to improve and help her to feel confident to know that she can reach every goal that she has. We’re just happy that she chose Towson and that she’s with us.”

Senior Phontavia Sawyer placed first in the shot put event with a toss of 14.68 meters on the second day of the meet.

Freshman Shamika Burton jumped 5.49 meters in the long jump earning fourth place during the second day of the meet.

“During the 3,000 was a personal best for her so that’s two personal bests she’s had in track so far so she loves the sport,” Jackson said. “Very positive, has great attitude, really enjoys what she does and it really shows.”

“She’s one of our leaders for sure… she works hard, she makes sacrifices day in and day out and she believes in herself that she’s willing to compete anybody at any level at any time,” Jackson said. “It’s never a surprise when she does something like this and this is what we plan for.”

Contribution came from young and experienced members of the team during this past weekend’s meet. Seniors such as Reid have had an impact on their younger teammates.

“She’s doing extended teaching and she’s working long hours and coming to practice with me in the evening sometimes even until 8:30 p.m.,” Jackson said. “It gives the freshman confidence to know that they can do this as well and can do it well over a four year period.”

This past weekend was Towson’s first time competing in the Virginia Tech Invitational.

“For us to be able to have the opportunity to go to a place like that from one of the big time programs that does really well at the national level says a lot about our program,” Jackson said. “How we’re representing ourselves and what people see in us and then also we’re a program to be reckoned with as well.”