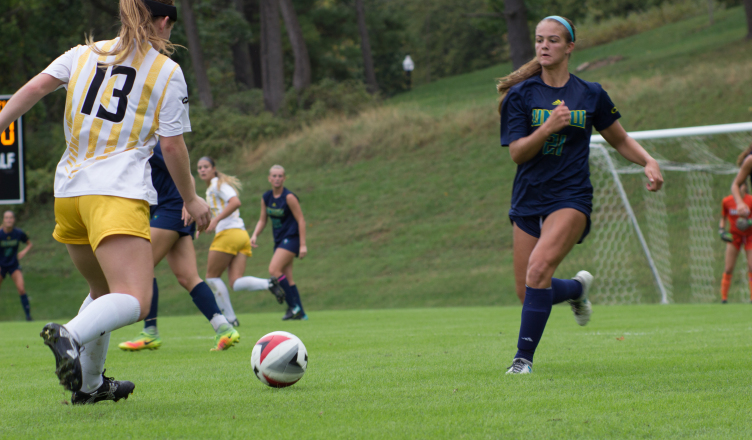 Towson responded to a 2-1 double overtime loss to James Madison with a 1-0 win over UNC Wilmington Sunday on senior day and the final home game of the season.

Towson controlled the ball throughout the first half, opening up space in the UNC Wilmington defense. Bove was the focal point of much of the Towson attack in that period.

Just minutes into the game, sophomore Justine Stoner sent in a cross that found the foot of Bove, but the shot was launched over the crossbar which squandered the early scoring opportunity for Towson.

Bove didn’t miss her next opportunity. In the 20th minute, junior winger McKenzie McCaull sent a cross into the box. The pass deflected off of freshman forward Afton Kalkose and found Bove once again. This time, the senior midfielder laced a shot into the roof of the net for the game’s deciding goal.

“It feels amazing,” Bove said. “I’ve made some of my best friends on this team, so it’s a nice way to end playing here.”

UNC Wilmington forced Towson to defend several dangerous set pieces, and played much of the second half in the team’s final third.

Sebolao was forced to make her toughest save of the day in the 76th minute as several UNC Wilmington players crowded the penalty area, and Meg Salvaodore whipped a low header on net.

“It’s exciting,” Sebolao said. “We’ve had a little bit of a rough conference play, so for us five seniors to play our last home game and not only win, but keep the ball out of the net was awesome.”

This win came following the Tigers overtime loss to the Dukes on Thursday. The Dukes scored with less than two minutes left in the game to force overtime before winning the game three minutes into the second overtime.

“To win a game like this against a good Wilmington team that’s been a little snake bitten like us, it means a lot,” Head Coach Greg Paynter said. “We held on to that one goal lead this time, unlike so many of the opportunities we’ve had this year so I’m really proud.”

Towson will need to win its final two games on the road, to guarantee a spot in the Colonial Athletic Association tournament. The team takes on Northeastern Thursday at 6 p.m. and William & Mary Sunday at 1 p.m.