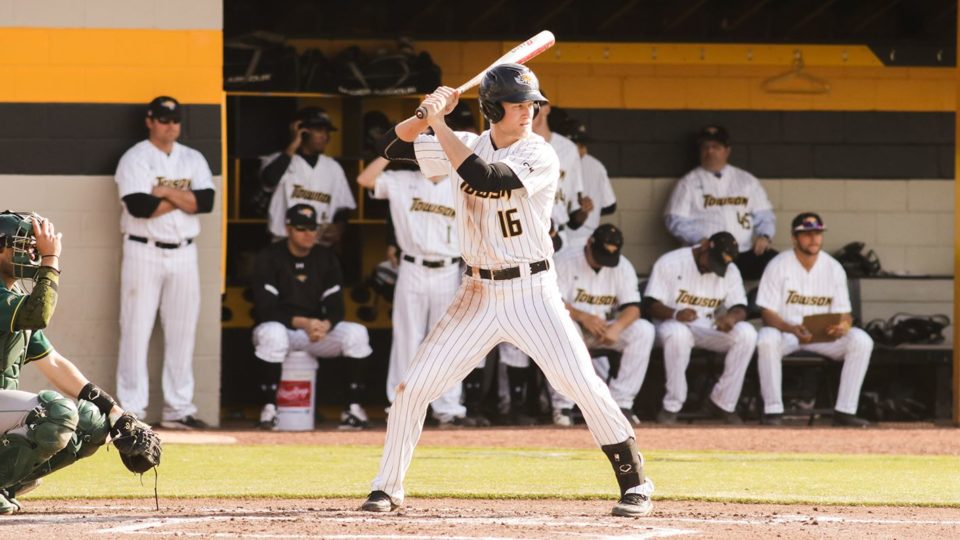 The Tigers faced off in a pair of local games this week, splitting their results with a victory over UMBC, but a loss to Coppin State.

Against the Eagles (20-14, 11-4 MEAC) on Wednesday, the Tigers (8-28, 3-6 CAA) went to the bullpen early and often, using six pitchers in the game, and taking junior pitcher Connor Coyle out after three hitless innings. Tyner said the decision to pull him early was so he could start Sunday’s game against Delaware.

“He was recruited to come in here and be a weekend-type guy,” Tyner said. “He’s gotten good command of his fastball and he gives us a good chance to win.”

After the Eagles added another run to their lead, The Tigers got on the board with two runs in the seventh inning to reduce the deficit to 4-2.

Towson could only muster one more hit in the game, falling to Coppin State 5-2.

On Tuesday, Towson dominated UMBC from start to finish in a 7-2 win at Alumni Field in Baltimore.

Freshman pitcher Dallas Repine was nearly untouchable as he entered the eighth inning without allowing a single hit.

“The longer we got going, I was thinking ‘just stay consistent, don’t look at the scoreboard, don’t think about it,’” Repine said. “‘Just keep doing what I was doing all game.’”

Repine’s no-hitter was broken up when Retrievers (17-17, 3-9 Am. East) shortstop Andres Macahdo singled to start the eighth.

“Going into the 8th, I was a little nervous, I kind of knew what was going on,” Repine said. “In my head, I was thinking ‘just keep throwing like you’ve been throwing all game and maybe you’ll get it, maybe you won’t.’”

Repine (1-4) finished the eighth inning with just the one hit allowed, zero runs allowed and struck out seven for his first victory of the season.

“Coach [Miles] Miller does earn his paycheck and the guys who listen and go through the program have reaped a significant amount of reward,” Tyner said. “Dallas is coachable and wants to win, plus it doesn’t hurt that he’s 6 ‘7” and he throws 92 mph.”

Thanks to Repine’s efforts, the Tigers did not have to do much at the plate, but they still did. Freshman outfielder Javon Fields, the reigning CAA Freshman of the Week, continued his hot streak, going 3-for-5 with two RBIs.

After collecting a season-high 15 hits in Sunday’s loss to Hofstra, Towson set a new high, battering UMBC’s pitching with 17 hits.

“When we go back to being athletic, being balanced, hitting a pitch where it’s pitched, not trying to do too much with it, we’ll hit with anybody,” Tyner said. “We have to realize that we are not bomb droppers, we’re not built that way. We’re built for ‘hit it and run.’”

The Tigers will return to conference play, hosting the Delaware Blue Hens for a three game series this weekend. The first game will begin at 3 p.m. on Friday, April 19 at John B. Schuerholz Park.