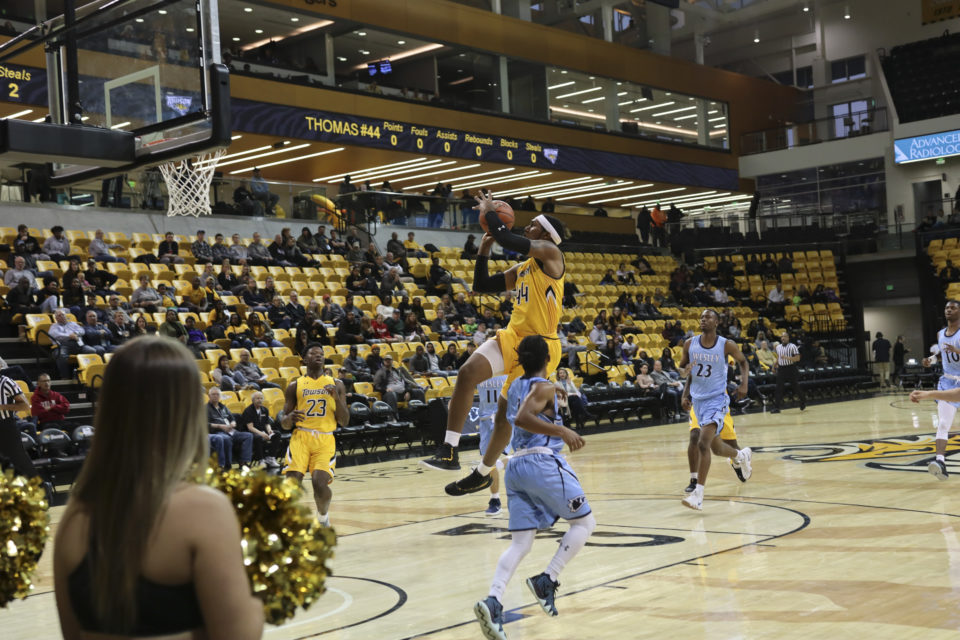 With the Tigers holding on to a slim 53-49 lead with 50 seconds left, Towson seemed in control to leave TD Arena victorious. Then, junior guard Grant Riller scored the final five points of the game as the College of Charleston wiped away the deficit and earned the 54-53 win, despite the Tigers getting two opportunities to put the game away.

Junior guard Tobias Howard and freshman guard Allen Betrand led Towson (8-16, 4-7 CAA) in scoring with 10 points each. Junior guard Brian Fobbs saw his streak of scoring in double figures end as he finished with nine points. Fobbs shot 30 percent from the field and did not connect on any three-pointers.

“He will respond, he’s mentally tough and talented,” said Head Coach Pat Skerry. “Not the ending we wanted at Charleston, but the key now is not to take a step backwards.”

“He’s a lot tougher than he looks and did a great job defending Brantley and he didn’t foul him,” Skerry said. “He’s been fun to see and could be all-conference in defense.”

Charleston’s (18-6, 7-4 CAA) three-point shooting in the first half kept them in the game early on as the Cougars made seven from downtown.

Despite the advantage in free throw percentage, the Tigers faltered when it mattered most, missing two crucial free throws in the game’s waning seconds.

Four of Towson’s last five games have been one possession finishes and whether or not those close games build resilience in this young team remains to be seen.

“We’ll find out, but there are no moral victories,” Skerry said. “It’s about playing the right way and to be in a position to win every night. Winning close games is a byproduct of that.”

In the final seconds of Towson’s game against UNCW, Fobbs erased six years of frustration with two free throws to put the Tigers ahead for good in the 77-76 victory Thursday night. This win marks the first victory over UNCW (8-15, 4-6 CAA) in Trask Coliseum since 2013.

Fobbs was superb, scoring 24 points for his 19th straight game scoring in double figures. He was dominant on the boards, collecting 11 rebounds for his second double-double of the season.

Tunstall, Howard and senior Jordan McNeil each contributed 11 points, totalling a season-high for Tunstall. Towson had the hot hand, shooting a season best 58.8 percent from the field, however, their 55.6 percent efficiency from the charity stripe made the game closer than it could’ve been.

“We’ve done a good job on the road and we hope to continue that at home on Saturday,” Skerry said. “Our guys are smart enough to know that every game is 50-50 and can you get that one or two possessions per half.”

Saturday’s game against the Dukes is slated for 4 p.m. at SECU Arena.