After last week’s meet in New Hampshire, head coach Jay Ramirez gave his team a pep talk. Ramirez knew the team had talent and skill, which they’ve already displayed in previous weeks. The issue was a concern about becoming too self-satisfied with their early season success, as last week’s meet in Durham saw several mistakes via falls that became apparent on the balance beam.

“It was a good reality check and I think it’s what the team needed,” senior Melissa Temkov said. “I think the team needed to take a step back and realize who we are and what our goal is and what we’re trying to get towards. We sat down and we talked about ways that we can improve and it really helped us.”

If anything, Friday night’s return home for the first time in several weeks could give a fresh start to a Tiger team wanting a boost. Having a raucous crowd filled that included many of their peers from the student-athlete community seemed to have helped.

Another assessment from Friday night could have also been displays of resolve after a stumble. One example could be seen on the uneven bars. After a hard fall on the mat amidst her high bar transition, Freshman Camille Vitoff didn’t appear as affected as she did stoic while reapplying chalk to her hands before walking back to the bars to finish her routine, which she did.

On the balance beam, the team reduced their falls to just one which Ramirez and his staff were happy to see.

“So beam is a very mental event,” Ramirez said. “So we just created mental routines for them, we talked them through it, they did their mental routine before the meet before they went. They learned their cues of what to do when they do the skills, so. [It] still was a little shaky, but overall, it was clearly much better than last week, so we’re happy with the outcome,”

Performing in front of the home crowd, the floor routine was the exercise that garnered the most raucous period from inside SECU Arena. It was also the most important, as the final score would indicate less than an hour later.

Towson’s collective 48.775 score on the final routine was just enough to push the Tigers over the top over the visitors from Chapel Hill.

“I think floor is probably my favorite event because it’s an opportunity to show off, almost, and I almost put on a character when I go into my floor routine,” Temkov said.

The Smithville, Ontario native sees the exercise as a way to show one’s personality.

“Everyone always tells me to be a superhero and (junior) Tess [Zientek] on the team before every floor routine I do, she comes up to me and she says “May the force be with you,” Temkov said. “So as you can tell, I’m a bit of a nerd. All four years, I’ve had nerd floor music and in my floor routine, I just feel great. I’m putting on a character, I’m putting on a show; I’m giving people entertainment with my floor routine.”

Another show of personality was Ramirez, who, albeit seemingly nervous, was ecstatic when he saw his team finish their routines on the floor without a mistake. Temkov’s 9.800 score which was matched by teammate sophomore Emerson Hurst. Hurst also scored a 9.875 on the balance beam.

That sense of entertainment reached its peak when the final scores were displayed aloud, ending the two match skid for the team. “We came into the gym, we changed our attitude, we were really gunning for what we wanted, and I think the coaches had a really good hand in putting us in a place where we had a successful meet tonight.”

Towson will take a trip up to western Pennsylvania on Saturday, Feb. 15 when they match up with the University of Pittsburgh at 7 p.m. 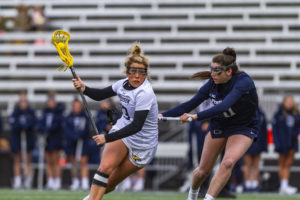