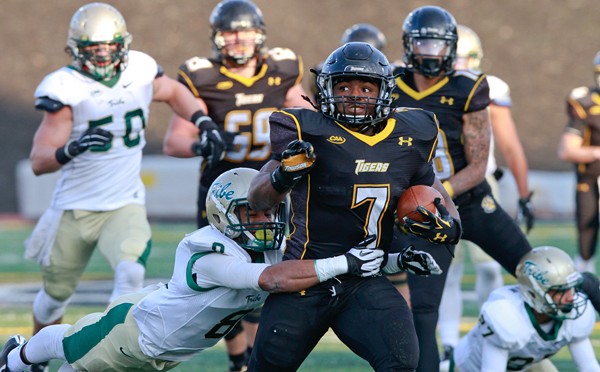 Towson came into the 2014 season with hefty expectations after advancing to the Football Championship Subdivision Championship game last season. After a 0-2 start and a slew of injuries, the goals for this team changed.

However, not many expected the season to end the way it did, falling 13-7 at the hands of the previously winless Rhode Island Rams in Kingston, Rhode Island on Saturday.

The loss clinches the first losing season for the Tigers since a 1-10 campaign in 2010.

“[The season was] disappointingly inconsistent,” Head Coach Rob Ambrose said. “And that’s nobody’s fault but mine. I know it will [change next year].”

Rhode Island got the ball to start the game and established its offense right away. Running back Lyle McCombs had a 24-yard run that highlighted a 12-play, 70-yard drive that ended in a touchdown pass from linebacker T.J. Anderson to fullback Justin Favreau to make it 7-0 early.

Towson got its run game going on the next drive, moving down to the Rhode Island 18-yard line after a 24-yard run from junior quarterback Connor Frazier. However, Frazier was sacked at the 29-yard line on third down and Towson could not convert on a 4th-and-21 to end the opportunity.

After the teams traded punts, the Tigers put together their first scoring drive as the second half progressed. Frazier led a nine-play, rush-only drive that ended in a six-yard touchdown run from sophomore running back Darius Victor to make it 7-7 with 1:53 left in the first half.

The ensuing kick hit the foot of a Rhode Island player, allowing the home team to take over at its 45-yard line. McCombs rushed for 11 yards on a 28-yard drive that ended with a 44-yard field goal by kicker Dylan Smith to make it 10-7 at the end the half. It was the first field goal for the team this season.

Towson finished with 88 yards total in the first half. Frazier was 1-for-5 for 13 yards and was sacked three times.

Ambrose said he is confident Frazier will be in completion for the starting quarterback spot next year.

“He’ll be competing for a starting spot,” Ambrose said. “I don’t have any question about that. It’s kind of clear to the team but it hasn’t been spelled out in exact detail, but there are no returning starters on this team. They are all going to have to earn it.”

Two more punts followed at the start of the half, but the Tigers built some offensive momentum on their second drive. Starting at the Rams’ 44-yard line, the Tigers moved to the Rams’ nine-yard line, but Victor was stopped for a loss of five on fourth down for the turnovers on downs.

After another Rhode Island punt, it was much the same for Towson. Frazier completed for 22 yards to senior wide receiver Derrick Joseph and rushed for 25 yards of his own, but he fumbled at the Rhode Island 23-yard line and the home team recovered to stop Towson deep inside its territory for the third time.

The Tigers were stopped at the Rams’ 26-yard line on their next drive.

“That was us being ineffective technically and schematically, which is coaching,” Ambrose said. “Couple that with the fact that right now we don’t have much a kicking game that we can count on to kick field goals. That makes for a very bad day.”

Rhode Island was stuck in its territory most of the second half, but managed to put together a 10-play, 50-yard drive with the help of 31 rushing yards by McCombs. Smith made it 13-7 after converting on a 42-yard field goal with 7:22 left in the game.

The Tigers defense stopped the Rams deep inside the Tigers territory and got their last chance to win the game. Frazier led the offense to midfield, but fumbled and the Rams took over to clinch the 13-7 win.

Ambrose said he’s already started recruiting for future classes, much like he did immediately after the 2014 season.

“You take the last four years of this program, we’ve got to be one of the winningest programs in the country,” Ambrose said. “We’re still building towards the level of success that a North Dakota State or an Eastern Washington would have, but all those took well over 10 years to build. We’re right in the thick of it.” 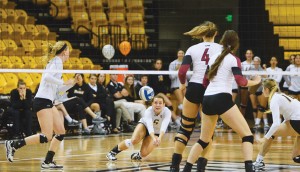 Previous post Towson falls in first round of CAA tournament