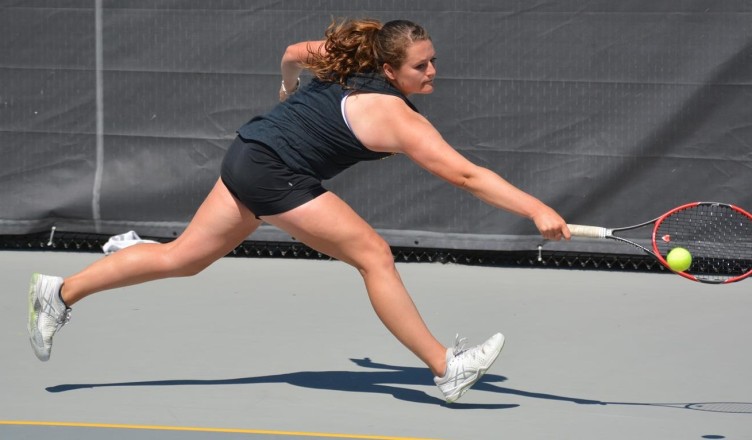 The Dukes came into the match nationally ranked No. 80 in Division I by the Intercollegiate Tennis Association (ITA), carrying a perfect 8-0 record on the season.

James Madison started the match by winning two doubles flights to take the opening point. Anna Makarova and Emma Petersen defeated the No. 2 team of Renate van Oorschodt and Barbora Vasilkova 6-2, while Jona Roka and Dylan Owens beat the No. 3 team of Lucy Gloninger and Alexa Martinez 6-2. The No. 1 team of Lucy Williams and Jane Shusterman earned a strong 7-5 win over Liz Norman and Diane Flament, which prevented a sweep but came after the doubles point had already been clinched.

“Credit to Jane and Lucy for stepping up at the No. 1 position,” Head Coach Jamie Peterson said. “They were down 3-0 at the start, but they changed some things and capitalized on that opportunity.”

The last two matches to finish were both three-setters. No. 1 Nicole Shakhnazarova won the second set of her match to tie it, but it came after James Madison had clinched the overall victory, so a 10-point match tiebreaker was played in lieu of a twelve-game third set. She ended up falling to Roka, 7-5, 3-6, 10-6.

No. 5 van Oorschodt’s match had already entered a third set before James Madison clinched the win, so that set was played out in its entirety. She held on to eventually win 6-2, 2-6, 6-6 (ret.) over Flament, and was leading 5-1 in the third-set tiebreak before her opponent succumbed to injury.

“Ren exemplified everything that we’re looking for — physically, mentally tough,” Peterson said. “She showed some fire, which is a bit out of character, but it’s good for her and her teammates to see that. She really wanted to win and she showed it.”

The Tigers dropped to 3-5 with Friday’s loss, but they have two weeks to train for their next three matches over spring break. They begin by facing Division II opponent Denison Monday, Mar. 19 before taking on NAIA opponent Keiser and finish up against Colonial Athletic Association (CAA) rival Hofstra. All three matches will be played at the USTA National Campus in Orlando, Florida.