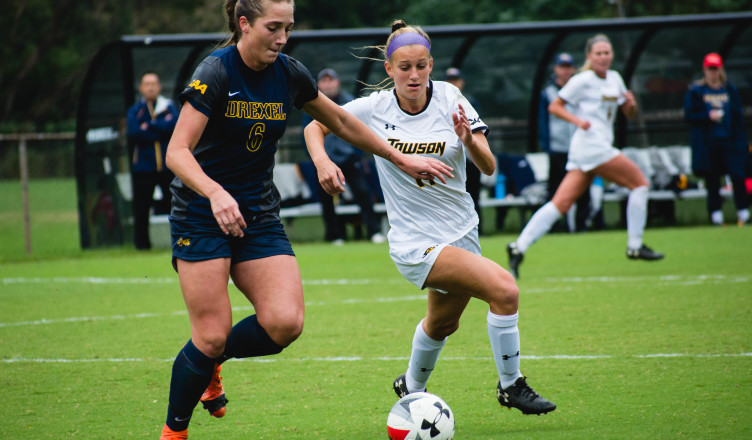 Towson’s final game of the 2018 campaign ended in gut wrenching fashion as the Tigers fell to UNC-Wilmington on the road, 4-3 Sunday afternoon.

Inside four minutes, forward Jenna Blank dished a pass over to Junior forward Christiana Davey, who placed the ball past the Wilmington keeper for her first career goal as a Tiger. Unfortunately for the Tigers, the lead did not last long as the Seahawks evened the score in the sixth minute when a shot from a Wilmington player rang off the post before another Seahawk collected the rebound and slotted the ball into the lower left corner.

Despite UNCW’s quick response, the Tigers nearly struck again. Davey almost added to her second tally of the day when she took a shot on goal a minute after UNCW’s equalizer, but the goalie was up to the task with a save. Then, after nearly 30 minutes filled with substitutions and corner kicks, Junior Justine Stoner nearly put Towson back in front when she struck the ball wide right of the post. In the 40th minute, defender Danielle Gardener added another opportunity for Towson to take the lead, but the ball was, again, stopped by the Seahawks keeper.

Things seemed to be going downhill when, 5 minutes before the half, UNCW added another tally when a shot from about 30 yards out found it’s way to the top right corner to take a 2-1 lead heading into the break. Then in the 57th minute, the Seahawks added to their lead when a deflected shot formed a loose ball in front of the Towson goal that wound up on the foot of an opponent.

At this point, it would have been easy to count the Tigers out considering they were facing an uphill climb against an 8-6 squad currently in playoff contention, but Tigers kept their heads up. In the 61st minute, Freshman Jenna Blank helped swing momentum back in Towson’s favor when the forward forced a turnover and made a great run before guiding the ball into the bottom left corner for her 3rd goal of the season. Providing another spark for the team was midfielder Olivia Ramirez, who, in the 73rd minute, nearly knotted the score when her shot was saved. Nikki Logan and Evelyn Neidert provided more shots that were either also saved or flew just wide of the post.

However, the Tigers weren’t through. In the 89th minute, Olivia Ramirez tied the game after  receiving a pass from Evelyn Neidert at the end line and then shot the ball from the top right edge of the penalty area putting it past the keeper. Goalie Megan Collins, who has been stellar all season, made another key save in the 90th minute, giving the Tigers a chance to win in overtime.

Unfortunately, a victory was not what to be for Towson as a UNCW overtime goal in the 95th minute brought the game, and season to a tough close.

“I am really happy with our resiliency to come back from a 3-1 deficit to tie it up 3-3,” said Head Coach Katherine Vettori. We fought all the way to the end…over the course of the season, we’ve developed a belief that we can come back. I don’t think we had that, necessarily, at the beginning of the season.”

When asked what things her team can build off of from this year, Vettori said, “Just trying to improve every single day…and continue to work on our attack so we can make some exciting games for our fans to watch.”

The Tigers ended the season with a record of 4-12-3. The team’s overall record, however,  could overlook how the team actually performed in some of those defeats. Among Towson’s 12 losses, half were decided by just one goal, and Towson outshot their opponents five times.