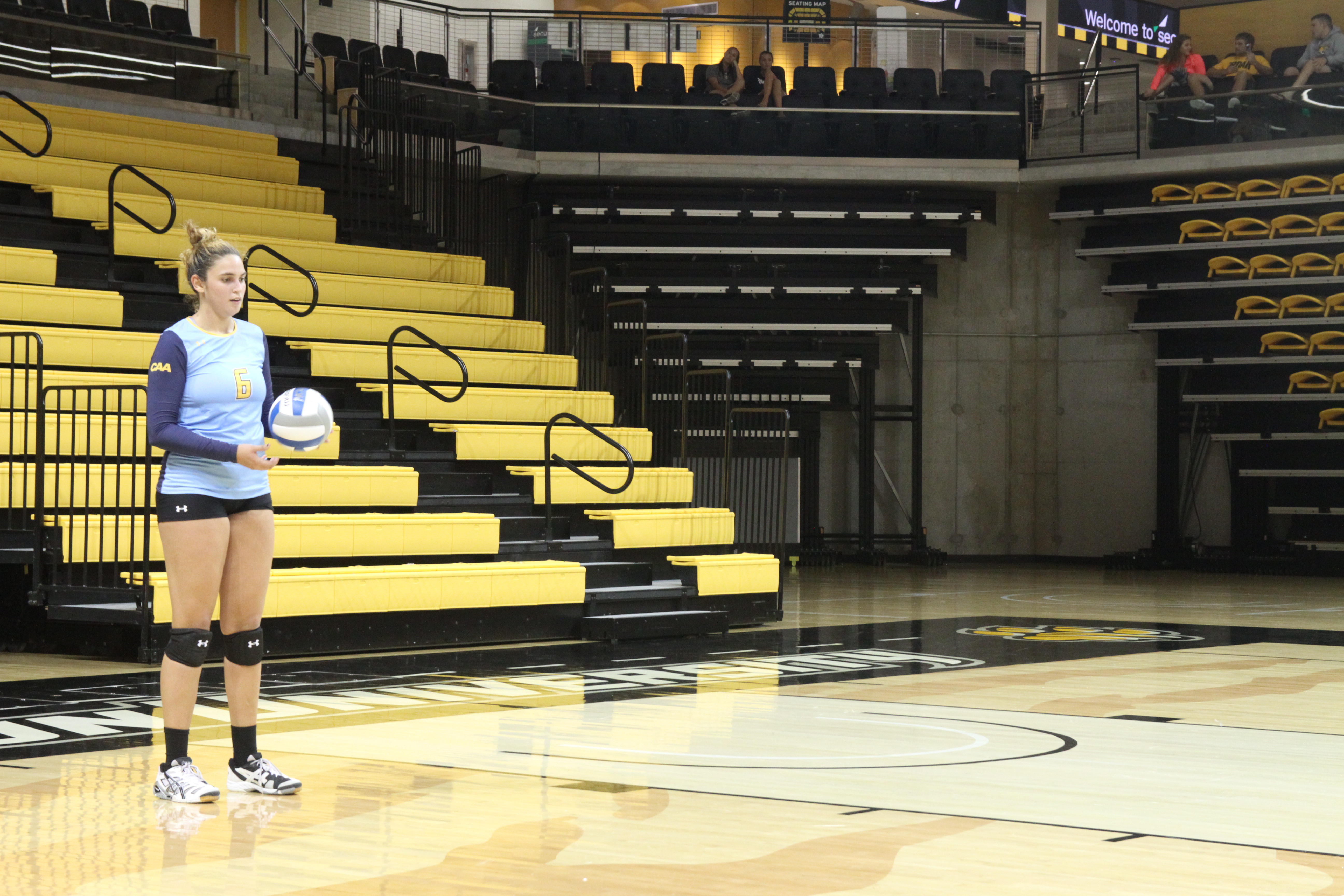 Towson split a pair of matches this weekend at SECU Arena, defeating UNC Wilmington Saturday, but falling to College of Charleston Friday.

In the first set, both teams battled back and forth and were tied early 7-7. However, UNC Wilmington took a 13-9 lead, forcing Head Coach Don Metil to call a timeout.

“We lost that first set because we had way too many errors,” sophomore outside hitter Carola Biver said. “So what coach told us was just to take care of the ball, and we will be the team that succeeds. That is exactly what we did, and that is exactly why we won tonight.”

After the pause, the Tigers began to chip away at the deficit and drew even with the Seahawks 17-17, but ultimately dropped the set 25-23.

Towson took the second set 25-18, despite a late run by UNC Wilmington, and went into the intermission tied 1-1.

The Tigers extended their lead in the match 2-1 after running away with the third set, defeating the Seahawks 25-14.

In the fourth set, Towson and UNC Wilmington were locked in another close battle, tied early 6-6. However, Towson extended its lead over UNC Wilmington 19-11 later in the match.

Despite a late rally from the Seahawks, the Tigers clinched the set 25-22 and won the match 3-1 after a kill from sophomore right side hitter Jocelyn Kuilan.

“It got a little bit close at the end,” Metil said. “We had to do a little bit with our serve receive. We knew we had an advantage on the right side, and for us to get Jocelyn the ball and have her end on a kill was very nice for us.”

In the first set, College of Charleston took advantage of seven Towson errors and jumped out to an early 7-3 lead.

Following a timeout called by Metil, Towson clawed its way back into the set and drew even at 9-9 after going on a 6-2 run.

Despite the Tigers run, the Cougars settled down and both teams traded points up until the end of the set.

However, it was College of Charleston that came away victorious after a pair of attack errors from Towson proved to be the difference.

The second set was another tight battle that saw both teams deadlocked 9-9. However, the Cougars took an 18-13 lead over the Tigers as the set progressed and eventually clinched a 25-20 win despite a late run by the Tigers.

In the third set, Towson earned its first victory of the match with a 25-20 win over College of Charleston. Towson got out to a fast start and took a 15-7 lead into the middle of the set.

The Cougars pulled within three points of the Tigers late in the set, but an attack error from freshman middle blocker Peyton Eisnaugle and a kill from senior outside hitter Jessica Lewis clinched the Tigers’ victory.

The fourth set was a much closer battle in the beginning stages. The score was tied 5-5 early and both teams continued to fight into the middle of the set with the score deadlocked at 15-15.

However, Towson went on a 4-0 run to take a 19-15 lead and eventually earned a 25-17 win after a kill from redshirt senior middle blocker Candace Steadman forced a decisive fifth set.

Following Monday’s game against Elon, Towson will hit the road to take on Hofstra Thursday and Northeastern on Saturday.