No. 11 Towson won its third Colonial Athletic Association (CAA) Championship in the last five years Saturday after a 4-2 win over the Fairfield Stags at Johnny Unitas Stadium.

The win clinched a NCAA Tournament berth for the Tigers (14-2), and the team will face the Hobart Statesmen (10-6) in a First Four. The winner will face the 2015 NCAA Champion Denver Pioneers (13-2).

“I’m extremely, extremely proud of our players for their resiliency and their ability to push forward and continuing to stay focused on that next play,” Head Coach Shawn Nadelen said. “Can’t say enough about my staff to get these guys prepared in a short turnaround to make sure we were ready to go and perform at our best.”

The Tigers faced an uphill battle after the Stags (9-8) shut the team out in the first half and took a 2-0 lead into halftime, as midfielder Charlie Schnider and attackman Charlie Horning both scored in the quarter.

It was the first time all season that the Tigers were held without a goal in the first half of a game.“I think the first half we were getting all out of sorts and it was similar to the Delaware game where we weren’t playing our game,” senior attackman Spencer Parks said. “You have to give credit to Fairfield’s goalie too.”

Towson fought back in the second half with a 4-0 run, which started with a man-up goal from junior attackman Tyler Konen.

“Tyler’s goal was a big one, just getting us on the board and getting us to calm down,” Parks said. “I think once we calmed down, we started moving the ball and playing how we should be playing and came out on top.”

Junior attackman Joe Seider scored his 31st goal of the season with three minutes left in the third quarter, tieing the game at 2-2. The offense moved from there, as Parks scored two minutes later and gave Towson its first lead of the game. 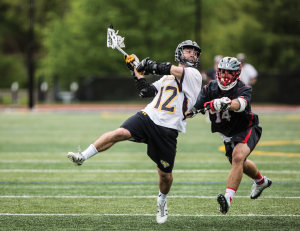 Parks added another goal late in the fourth quarter and Towson’s defense was able to shut out Fairfield’s offense in the second half.

“We came in and we emphasized, especially on defense, that it wasn’t even close to being over,” senior defenseman Mike Lowe said. “We thought we let two slip plays that led to two goals. Besides that, we played great defense and Tyler was seeing the ball great and making smart decisions on our clearing.”

Lowe was named the Tournament’s Most Outstanding Player. White, Parks and senior defenseman Nick Gorman were named to the All-Tournament Team. 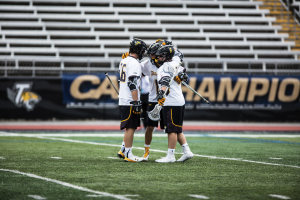 The Tigers move into the NCAA Tournament and will face the Hobart Statesmen. The game will be Wednesday at 4 p.m. at Johnny Unitas Stadium.