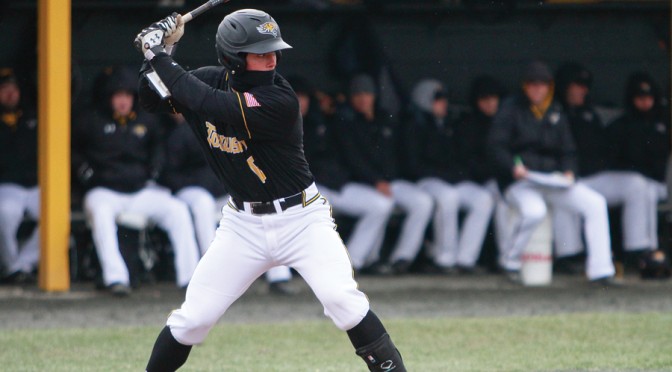 The Tigers (4-20, 1-5 Colonial Athletic Association) used a seven-inning start from junior right-hander Lee Lawler to beat the UNC Wilmington Seahawks (18-7, 5-1) by a score of 10-6 at Schuerholz Park in Towson on Sunday afternoon.

The game was the final installment of a three-game series between the two teams after Towson dropped the first two in extra innings by one run apiece.

Lawler (2-3) took the win with his outing on Sunday. It was the longest start by a Tiger this season. He managed to strike out eight Seahawks hitters while allowing four earned runs on eight hits and a walk.

“He had a really good curveball, which is what he got most of his strikeouts on,” Head Coach Mike Gottlieb said. “That was the best he has pitched for us. He is in his third year, and he has always showed glimpses, but never sustained it for six and seven innings so it was good to see.”

Sophomore left-hander Matt Golczewski came on in relief of Lawler in the eighth inning. After allowing a home run to the first batter he faced, Golczewski settled in and threw two innings of one-run ball.

In addition to Lawler’s seven innings, junior right-hander Austin Clark and sophomore right-hander Kevin Ross each tossed 6.2 innings in their starts over the weekend. Gottlieb said he hopes that’s evidence for things to come.

“You certainly hope that’s the case,” Gottlieb said. “Going into the season we felt that pitching would be our strength, but before this weekend we didn’t really have a strength. It started to show itself a bit against one of the best teams in the conference.”

Towson’s offense got on the board in the bottom of the third inning when UNC-Wilmington’s center fielder Casey Golden dropped a pop fly off the bat of sophomore second baseman Colin Dyer with the bases loaded, scoring three. A few batters later, sophomore catcher Brady Policelli singled to score Dyer and make it 4-1 in favor of the home team.

Following a Seahawks run, the Tigers were back at it in the bottom of the fourth, and, again, it was Dyer doing the damage. He came to the plate once again with the bases loaded and laced a double into the left-center gap, scoring all three runners and making it a 7-1 game.

In the bottom of the sixth inning, Towson finished its scoring on the day with a two-run double off the bat of freshman right-fielder Colin Gimblet, followed by a hard hit ground ball by Dyer, which was flubbed by UNC-Wilmington’s shortstop Kennard McDowell, scoring Gimblet.

Dyer went 1-for-5 at the plate with four RBI on the day. Gimblet added a 2-for-3 game with three runs scored and two RBI. Senior shortstop Peter Bowles went 2-for-4 and scored three times himself.

“[Dyer] has had some good at bats,” Gottlieb said. “He’s building confidence, showing that if they pitch him inside he can turn on the ball like he did with the bases loaded…He has turned into a real contributor for the team.”

The Seahawks starter, right-hander Evan Williams (1-1), was saddled with the loss. He did not allow any earned runs in his 2.2 innings of work, but was attributed four unearned runs from the error by Golden. He also walked two and hit four batters.

“The more pitches you see, the more likely you are to swing at good pitches,” Gottlieb said. We have talked about grinding out at bats. That’s been our plan for the last seven games.”

Towson continues with their homestand on Tuesday when they host the University of Maryland-Eastern Shore Hawks (7-16) at Schuerholz Park. First pitch is set for 3:30 p.m.