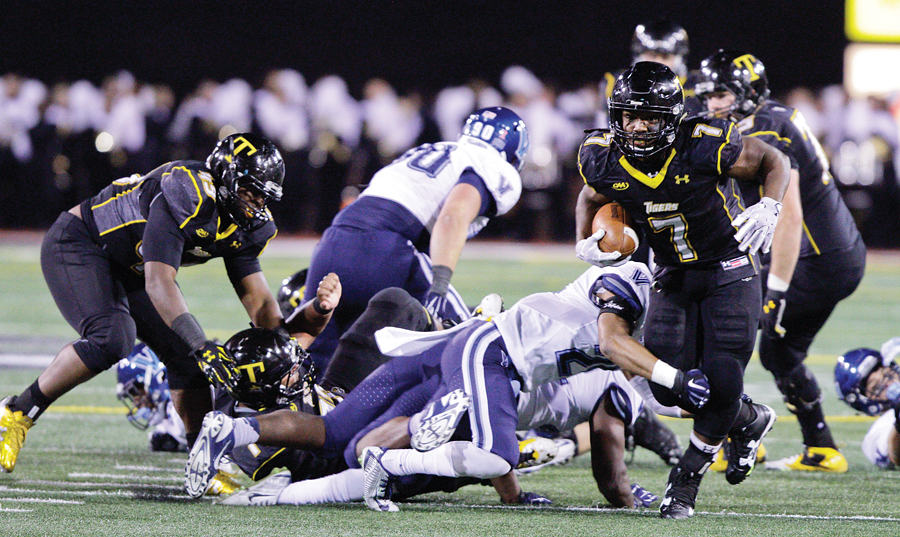 Two defensive touchdowns led Towson to a 28-21 victory over the No. 23 Villanova Wildcats in the Homecoming game on Saturday.

“I have a lot of emotions and thoughts in my head,” Head Coach Rob Ambrose said. “I want to congratulate my guys for finishing the job and representing Towson University football on Homecoming the right way.”

The Tigers had their second defensive touchdown late in the fourth quarter on a potential game-tying drive from the Wildcats.

The Wildcats faced fourth down at the Tigers’ 24-yard line and the pass rush made Bednarcyzk throw a wild pass into the Tigers’ secondary. Junior defensive back Romell Haley intercepted the pass and returned it 86-yards for the touchdown.

The play extended Towson’s lead to 28-14 and helped seal the game for the team.

Towson’s offense was limited to just 47 plays and 24 minutes of possession but still managed 292 yards.

The Tigers scored on their first offensive series, as redshirt senior quarterback Connor Frazier found redshirt wide receiver Brian Dowling in the back of the end zone for a 17-yard touchdown.

Later in the first quarter, Frazier chose to ran the ball up the middle and found open space for a 78-yard touchdown run, which gave Towson a 12-0 lead.

“We were just running a read zone play and I saw the defensive end bite down on Vito [Darius Victor], so I pulled the ball,” Frazier said. “The safety ran over to try and tackle Vito and there was just nobody there and I just took off.”

Frazier finished the game with 128 passing yards, one passing touchdown and 67 rushing yards.