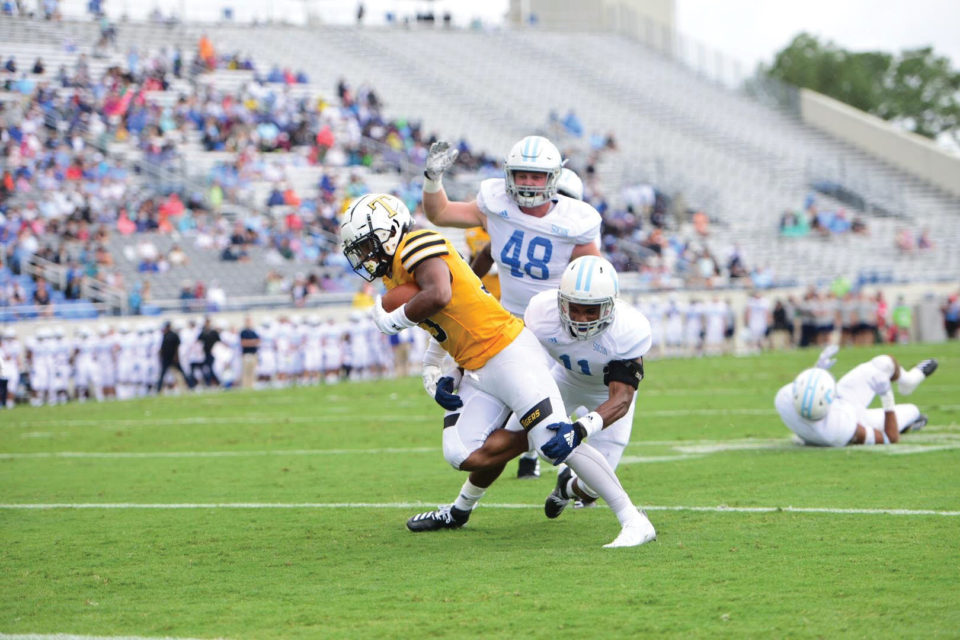 The Tigers had the ball for 17 minutes less than The Citadel Bulldogs, but despite some long Bulldog drives, made plays when necessary to secure a 28-21 victory on Saturday.

“They are an extremely tough quality opponent, it’s a long way from home but our team has character and never doubted we could win,” said head coach Rob Ambrose. “I’m glad we don’t have to play the option anymore.“

Towson started on offense, and the offensive line struggled on the first drive. Redshirt senior quarterback Tom Flacco was sacked, and a bad snap later in the drive cost the Tigers nine yards which forced Towson to punt.

On the Citadel’s first possession, redshirt sophomore A-back Dante Smith started with a run up the middle for eight yards before he fumbled the next play and senior defensive back Terrill Gillette recovered. After Flacco jumped over a defender for a first down, he found redshirt senior running back Shane Simpson in the flat for a wide-open six-yard touchdown.

The Bulldogs responded with an impressive drive that almost never happened. After Citadel junior quarterback Brandon Rainey nearly fumbled early, the Bulldogs drove to the Tigers redzone before penalties sent them back. A missed field goal gave the Towson defense a needed boost.

The Tigers took advantage of the missed opportunity, driving downfield effortlessly as Flacco quickly got the offense into scoring range. Senior kicker Aidan O’Neil began his quest to break the FCS all-time field goal record with a 40-yard kick that extended the lead to 10. That was O’Neill’s 54th career field goal, 21 shy of the all-time record.

The Citadel started their next drive with a long run by Rainey for 55 yards. Five plays later, Rainey scored from three yards out to cut the Tigers lead to 10-7.

On the ensuing drive, Simpson ran left and made a man miss en route to a 45-yard touchdown run.

After recovering a Citadel fumble, Flacco connected with redshirt junior tight end Jason Epps but he fumbled inside the five-yard line, giving the ball back to the Bulldogs.

After giving back the momentum, Ambrose told his team that, “You can’t control what happened in the past, all you can control is the next play.”

The Citadel continued to pick up rushing yards, surpassing 200 as a team in the first half. The Bulldogs converted a fourth and one which led to a one-yard touchdown run. The Tigers took a 17-14 lead into halftime.

In the second half, the rain began to pick up and both teams exchanged punts on three straight drives and the third quarter ended with neither team scoring.

To begin the fourth quarter, Flacco drove Towson inside the Citadel 10-yard line but had to settle for O’Neill’s second field goal of the game to increase their lead to 20-14.

The Bulldogs answered with a 75-yard drive that resulted in a touchdown, giving them their first lead of the game at 21-20.

With 3:31 to play in the game, Flacco connected with three different receivers before a big 25-yard run set the Tigers up at the Bulldog four-yard line.. Simpson would score his third touchdown of the game the next play to give Towson the lead with under two minutes remaining. Flacco found Allen for the two-point conversion to increase the lead to 28-21.

With the Citadel hoping for a game-tying drive, junior defensive back Coby Tippett intercepted a pass on the sideline on the first play, giving the Tigers possession. A 14-yard run by Simpson put the game on ice, sealing a season-opening victory that wasn’t lacking in drama.

“[Simpson] made plays when he had the ball in his hands.” Ambrose said. “He blocked very well, and [Flacco] got the ball to him. I thought he had a great game today.”

On defense, redshirt junior defensive lineman Bryce Carter led the Tigers with 13 tackles. Senior linebacker Robert Heyward was the other Towson defender with double-digit tackles, finishing with 11. The Tigers defense gave up 329 rushing yards, only 12 fewer than last year’s game against the Bulldogs.

“This is what they do extremely well. They mash you and they want to play four-down football.” Said Ambrose. “They don’t care about getting two yards on first down.”

Towson returns to Johnny Unitas Stadium for their home opener vs North Carolina Central on Saturday, Sept. 7. Kickoff is scheduled for 6 p.m. 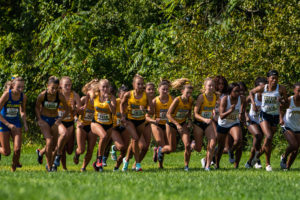