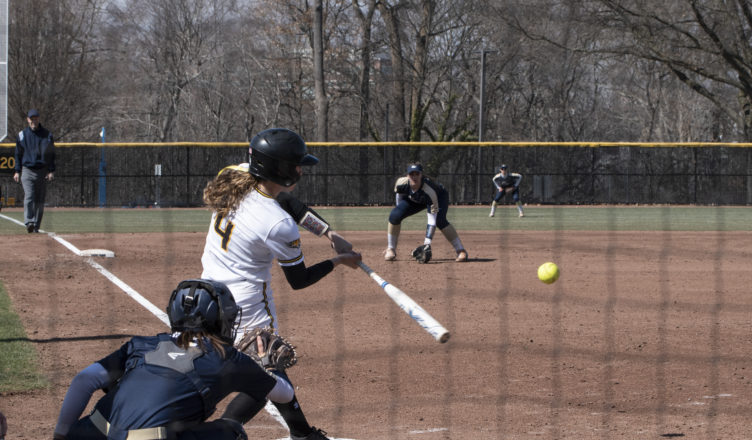 “We learned this weekend that we can play with some good teams,” head coach Lisa Costello said. “We played sloppy defensively Saturday. We cleaned that up and played much better on Sunday.”

“East Carolina has a tough line up,” Costello said. “We had to get through their best hitters and they came up in a big spot for them.”

With the game tied at 3-3 after six innings, extra innings were required. Towson struck first in the top of the 8th when senior first baseman Madison Wilson hit a two-RBI single to left center field. East Carolina responded with back to back home runs to walk off with the victory.

Kidwiler went 3-4 with an RBI leading the Tigers. Wilson also collected two hits and two RBI for Towson. Smith-Harrington took the loss on the mound pitching a complete game, but she allowed seven hits and five earned runs.

For the second time this season, mother nature attempted to curtail the Tigers’ weekend. Towson was originally scheduled to play a full five games, but snow canceled three of them, including both matches against Massachusetts.

“It’s very frustrating,” Costello said. “But you can’t do anything about it. You just have to roll with the punches.”

When the skies cleared Saturday night, the Tigers took the field, only to come up short against Pittsburgh (5-7, 0-0 ACC). After falling behind early 1-0, Towson tied the game off freshman outfielder Lauren Ringhiser’s sacrifice fly in the top of the 2nd that drove in Wilson.

The Panthers scored three runs in the bottom of the fifth taking advantage of a throwing error and wild pitch by the Tigers. Towson responded as Smith-Harrington drew a walk that brought home a run, but were retired in order the following inning to end the game.

“I love the teams that we have played so far,” Costello said. “They are solid teams and we know that we can play with them. I think we are playing well and will continue to get stronger.”

Towson heads to the nation’s capital next weekend for the Colonial Classic Tournament. They will face Princeton, George Washington and Georgetown. The Tigers first game is scheduled for 12 p.m. on Friday, Feb. 28 against Princeton.